Table Of Contents show
1 What is Jailbreaking?
2 Can I get banned for jailbreaking my console?
3 Disadvantages of Jailbreaking
4 If my PlayStation is jailbroken, can I still play PlayStation Plus?
4.1 Conclusion
4.2 Related Posts:

Have you ever wondered about getting or doing extra things with your PlayStation by jailbreaking it? Maybe one of your friends told you about it, and it sounds like something that is very beneficial to do? Well in this article we will answer all of your questions.

So can you get banned for jailbreaking a PlayStation?

This is because as soon as the console turns on, it automatically connects with the PlayStation servers, and they are instantly able to tell if the software of the machine has been altered at all.

If you alter or jailbreak your PlayStation in any way, you will be banned from PlayStation’s Network and will no longer be able to play online.

If you want to know more about ways to avoid getting banned when you jailbreak your console, and what the advantages and disadvantages there are to jailbreaking your PlayStation, you will want to keep reading.

To see some of the best Playstation accessories currently available you can click here.

You can also watch this video below to learn more as well. 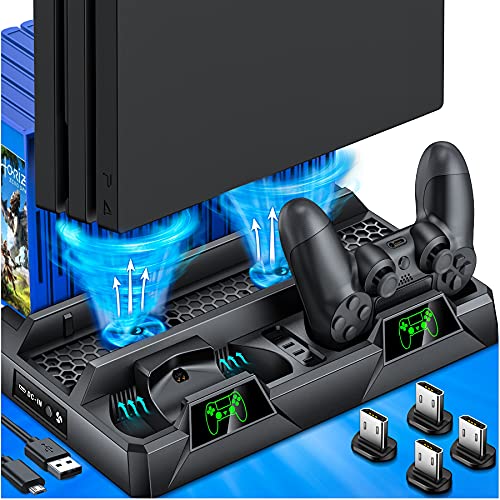 If you have a PS4 or PS5 you will want to get this charging and cooling stand. It works perfect to keep your console cool and makes your gaming setup look good at the same time.

You can simply place your controllers onto the charging pad. No plug needed

Jailbreaking whether you are talking about a PlayStation, iPhone, or other gaming systems basically just means that you are making your device “unlocked” and able to run any software that you choose. Many companies have “locked” devices that don’t allow you to install third party software for your safety and so that way you cannot install unauthorized software as well.

Jailbreaking is not always about using or installing unauthorized software but many people who jailbreak their consoles do it for that sole reason.

Since jailbreaking can be used for legal and illegal reasons it is frowned upon by all device makers and all of them will void your warranty if you jailbreak your device and in the case of Playstation they will also ban you from using their online services.

By jailbreaking, you can have access to many cool things that are not illegal, but it also comes with a negative side.

Below we will discuss the negative sides that come with jailbreaking your PlayStation as most people know all the good things you get doing it.

Can I get banned for jailbreaking my console?

Jailbreaking is not illegal but it is something that Playstation wants you to avoid so they put pretty stiff penalties on you for doing so. Depending on how you plan on using your console, jailbreaking could not only be bad for Playstation but it could also be bad for you!

It is not often not beneficial for the user to jailbreak their console as there are high chances that you may get banned for jailbreaking your PlayStation. Although you may not get banned immediately if you complete the process carefully and know a few tricks.

If you are going to jailbreak your PlayStation you may not catch the attention of the server by using a few tricks which may help in avoiding a ban. Here is a short video showing you some tricks to not getting caught when your PlayStation is banned.

If you get caught with a jailbroken PlayStation, you are bound to be banned from the network. The worst part is that it is not possible to get unbanned ever again with that console. If you get caught, you will also not have access to a lot of things on the PlayStation Network which is the opposite of what you want to accomplish by jailbreaking your console.

You should know that whenever you boot up your PlayStation, it will be in touch with the PlayStation server. So when you try to use software from an unauthorized source, Sony will immediately be notified of the infraction.

Once Sony is notified, they will immediately ban your account. This is why it is important that you avoid jailbreaking your PlayStation to avoid being banned.

When you jailbreak, you may face some disadvantages. Some of these are mentioned here. It is important to know the pros and cons of jailbreaking so that way you can make an informed decision.

As stated earlier, Sony can see the unauthorized sources where you get the games from. This may not only lead to the ban of your account but also may help in finding out the source to ban them as well. Even if you do the process smoothly and carefully, there is still a high chance of getting banned.

After getting banned for jailbreaking your PlayStation, the chances of getting unbanned are extremely low. You will lose access to online gaming and other online services you would normally use the PlayStation for when you get banned.

Jailbreaking is permanent and once you have done it to your console, even if you unjailbreak your console, PlayStation can tell and will still ban you and if you were already banned then they will not unban you even if you remove the jailbreak.

You lose access to these because of not having the PSN. Also, you’ll be stuck with the same framework of your console forever. Another disadvantage you may have to face is that you will not have any access to new games online or new online updates.

This is a question many people have. PlayStation Plus has become extremely popular recently as they have been adding popular games to the online platform that you can play for free! Because these games are popular and are 100% free, then many people prefer to just have a PlayStation Plus account as they get the games for free similar to your PlayStation being jailbroken.

If your device is already jailbroken though, you cannot have a PlayStation Plus account as you will be banned from the entire online PlayStation network.

Now that you know all about the bad side of jailbreaking your device as well as the good side of doing it, you can decide for yourself what you want to do. Many people after reading this will probably have decided that jailbreaking their device just simply isn’t worth the risk of being banned.

In today’s day and age of online gaming, many people prefer to play online over having a jailbroken PlayStation. This is because people like to play and converse with people all over the globe.

Not only that, but PlayStation now has the PlayStation Plus accounts where people can play free games as well as have access to playing all your games online and talking with all of your friends.

If you do decide to jailbreak your PlayStation though, you will want to be extremely careful as Sony has been cracking down on PlayStations that have been jailbroken. They do not want them on their platform, and are very strict about any user that has a jailbroken device being banned immediately.