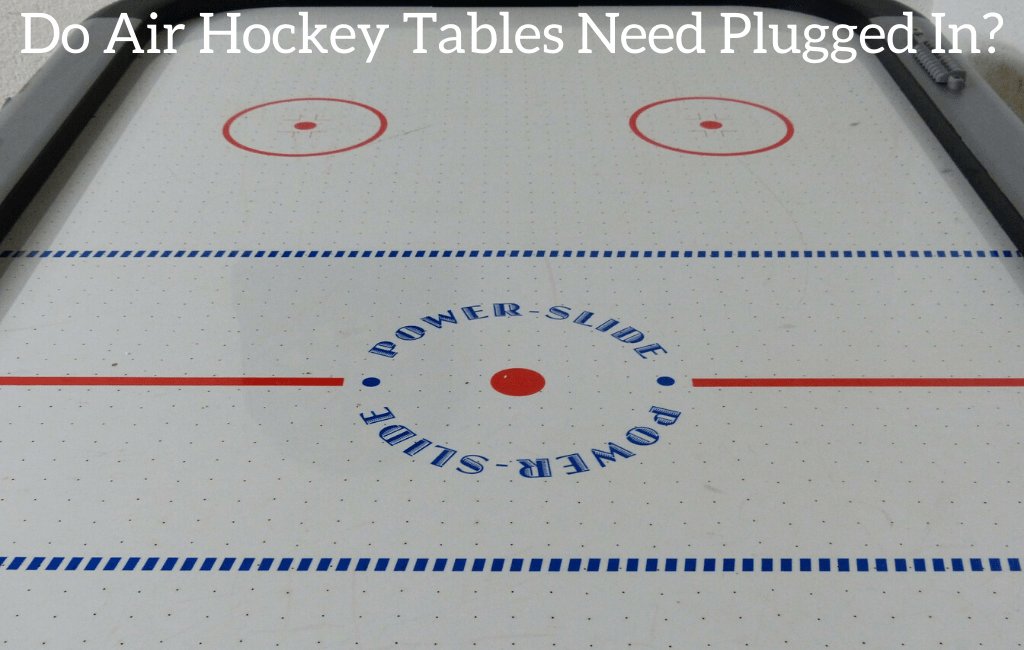 If you’ve ever been to an arcade you’ve probably seen an air hockey table. I remember as a kid they even had them in the game area in the front part inside Walmarts! Air hockey tables have been around since the early 1970s and are a favorite game of many people.

That brings us to the point of this article, learning more about the famous air hockey table.

Do air hockey tables need to be plugged in? Air hockey tables all have a motor that requires electricity to run. The motor is designed to push air up through the hundreds of tiny holes on the table surface to help the puck glide across it. Without being plugged in the puck would hardly move at all and the game would be far less fun.

One of the best things about air hockey is getting to prove that you are the best. When my friends and I would play we would always have the winner stay while the loser swapped out. The last person standing was the “champion”.

These styles of “tournaments” are what made having an air hockey table or playing one at an arcade (or Walmart) a real treat.

To find the most popular accessories for your air hockey table just click here.

There are different types of air hockey tables. The most common is about the one you see in most arcades. They look like a chunky pool table with a surrounding rail to help keep the puck and paddles from flying off during play.

In recent years they have added plexiglass sides as well to keep the puck from flying off and hitting someone.

On each player’s side, there is a slot that serves as a goal. In order to avoid friction and gain speed, an air hockey table will have an air compressor that produces a cushion of air on the table by pushing the compressed air through very tiny holes. In order to work, the compressor needs to be plugged-in to create a constant flow of air.

Some air hockey tables will just be extremely slick and won’t have a compressor to help the puck move but these are the exception more than the rule.

Some arcades do have time limits on how long the air stays on as they don’t want the table running all day but the official rules do not have a time limit.

Winning the game is as simple as scoring more goals than your opponent but that simplicity becomes much more complicated when you try to score those goals.

After playing a while you will soon realize that shooting the puck straight at the goal will often not get you a goal. Getting a goal will require some strategy as well as some knowledge of geometry!

Yes, if you are going to be good at air hockey then it requires some geometry to get some goals. Air hockey is a very fast paced game and sometimes you will get lucky and score a goal by just hitting the puck wildly but when you apply some aspects of geometry you will be far more likely to score consistently.

Knowing the correct angles to hit the puck against the rail as well as knowing where the puck will bounce when the opponent hits it on a rail will put you miles ahead of most competitors.

When I first started playing I would just hit the puck as hard as I could trying to get it to bounce like crazy. Every once in a while I would get lucky and score but I would also allow a bunch of goals while wildly trying to hit the puck.

As I got older I quickly realized that if I hit the puck towards a specific point on the rail it would bounce directly towards the goal. I would score far more goals this way then I would just hitting the puck as hard as I could!

Another thing that you need to be good at air hockey is fast reflexes. You have to move your paddle to block the goal at the right spot and at the right time to make sure that it doesn’t slip right by.

If your paddle is a little to the right or left the puck can squeeze right by your paddle into the corner of the goal before you even know what happened!

Having quick reflexes will allow you to move the paddle over to meet the puck rather than the puck finding your paddle and possibly slipping right on by.

Just because you are good at geometry or have good reflexes doesn’t mean you will always win. You also have to put some power behind those shots.

Most air hockey tables will have the puck move really fast as it is but if you add a little extra “oomph” to your shot you will often squeeze a few extra goals through that you wouldn’t have if you would have hit the puck softer.

As I mentioned earlier it isn’t all about power but hitting the puck hard is a good way to keep your opponent off balance.

If you are just getting into air hockey or want to learn more, then a good way to do it is to watch some pros play. Specifically watch the angles that they use along the rails as well as how they try to get their opponents of balance.

This video below is from the 2012 Air Hockey World Championship and is sure to have some great tips for you to pick up on.

Air hockey was invented in the United States in 1969. The game was created by a group of workers at a billiard company in Cincinnati, Ohio.

The game became available to the public in the early 1970s and was soon a smashing success. It was popular in arcades all across the country that were also in the height of their popularity.

With the development of video games in the household markets, air hockey followed the arcades and slowly lost market share as people could engage in digital entertainment from the comfort of their couch. Yet, air hockey was popular enough that it became part of the general culture and is known by everybody as a fun and exciting game for the whole family.

The history of air hockey is a real success story. This very innovative game from the ’70s became popular as soon as it came out. In only a few years, air hockey was among the most popular games in arcades and after more than fifty years, it is still a classic game with dedicated clubs and tournaments.

The innovations that made air hockey so distinctive from other games is certainly part of the reason for its success and the quick notoriety it acquired in such a short time.

When it was released the game was futuristic, innovative and fun. Because of these three elements, it fit perfectly in an era when science fiction and new technologies were very prominent in the cinemas and tv shows.

Since arcades were the “place to be” for many young people of that era, air hockey has stayed quite popular over the years.

It has also remained popular because of how cheaply the tables can be purchased for. This last year my wife and I got a table for our kids for Christmas. It wasn’t anything fancy but we only paid around $125 for it. Compare that to the thousands that arcade and pinball machines cost and you can see why air hockey has continued to be popular.

The game is simply budget friendly!

created in Houston back in 1973 and official rules were set soon after. The game with its

fast-paced gameplay and high speed attracted a broad following. This infatuation for this new

air hockey tables were all over the place.

Even if it looks easy, air hockey like any other sport is quite demanding physically and a good player will spend a lot of time practicing in order to improve his gameplay and reach a higher ranking. Not only do you need to be fast but you need to be precise and stay focused at all times.

Tournaments are a great way to show off your skills as well as to prove to yourself that you are the best.

Even if you don’t play in an official tournament, an unofficial one with friends and family is still sure to be tons of fun!

Air hockey is still a popular game even today. When you walk into an arcade you will often hear the familiar whack of the paddles hitting the puck and of the puck hitting the rails and you know there is an air hockey table before you ever see it.

Yes, most air hockey tables require electricity to run and so they do cost a little bit of money but the price is very small compared to the amount of fun that you can have with one of your own.