Collecting records can be an amazing hobby to get into but there are many questions in this industry that are hard to find answers for. That is why I am writing this article, to help you understand more about record players and if there is really a difference of sound between one player and another.

In this article we will go into depth about those different factors and how they affect your listening experience.

Before we dive into some specifics I wanted to give a little bit of background about record players and how they came about.

Record players used to be the major way of distributing and listening to music all across the world. The rise of the music industry coincided with the most popular era of vinyl records.

The digital age may have replaced most record players as a means of listening to music, but they are still valuable to people. Some people still own vinyl collections and make use of record players to listen to music.

There are a couple of reasons that people still choose vinyl even today. One reason is because the sound quality of vinyl records is believed to be excellent. This has led to a discussion that claims that vinyl records are a better music delivery method than any digital or modern method. It is not clear if this assumption is correct or wrong, but the quality of music produced by vinyl records is impressive.

The second reason that people choose vinyl is because of the nostalgia attached to it. There is nothing quite like the “white noise” of a record when it first starts as you wait for your favorite album to begin.

Bringing back those memories from the past is why many people continue to play records even today.

Because of the rise in popularity of vinyl in recent years, there have cropped up arguments among record collectors (why are collectors always fighting anyway?).  This particular argument is about the sound quality of your player.

If you only listen to music because of the superior sound quality then you will want to make sure that your  record player isn’t hurting that sound. If one player is better than another at putting out quality sound that is probably something that you will want to know as well.

What is the sound difference in record players?

The music made by one record player is the same music that is made by another. This is also true for digital music and other forms of music delivery. One constant thing is that, while the sound produced may sound the same, there is a difference in the quality of music produced.

This is one of the reasons why there are grades of record players. Some record players are said to have better sound quality than others because they are believed to offer a better experience. While the differences may be subtle, it is certainly true to say that all record players do not sound the same.

The same principle applies to vinyl discs as well. They operate on the same principle and are made of the same material. When you record one song or album on two different discs, the experience may not be the same. They may both produce excellent sound quality, but there can be slight differences between them as well. The magnetic process of placing a track or album on a vinyl disc is the same for all discs, but the sound produced may have little differences.

So yes, there is a sound difference between different players, but what causes those differences?

Record players produce different sounds, and though the differences are often minor, they do exist. In some cases, a specific model of player will produce extremely poor sound quality. With a good knowledge of some reasons for the difference in sound, you can improve the sound quality of your record player or make sure that the one you buy is as good quality as possible.

Some of the common reasons for the sound difference between record players include:

The build quality of the record player itself is a huge determining factor in the sound quality. If you purchase a record player that is $50 you can expect it to work but the quality won’t be very high.

That is because to make a player that cheaply and still make a profit companies have to cut corners. I’m not saying that cheap players don’t have a place on the market as they can be great for beginners or people just starting out but don’t expect a cheap player to have great sound quality.

The more expensive the player the better quality you will normally get. This isn’t always true but it is a good portion of the time.

The pin or needle of the record player is needed to play the music. Once you place the record on the plate, the needle is placed onto the disc, and the music begins to play.

The quality of the needle will determine the sound quality you will get. A needle that is new and is sharp will be able to generate the best sound quality, and one that is dull will not.

The quality of the needle will also have an impact on the sound. Cheaper needles are made of metal while more expensive ones will often be diamond tipped. The sound quality will be much better with a higher quality needle.

The needle also has an impact on the vinyl record, as a damaged needle can scratch the vinyl and ruin the record. It is, therefore, imperative to have a needle of the highest quality if you want the best possible sound.

3. The vibration of the record player

Once you place the record on the turntable and turn your record on your platter will begin to rotate. Placing the needle on the record will not only start the music playing but it will also start to cause some vibrations.

This vibration is determined by the interaction of the needle with the nearly invisible grooves that are found on the record. The grooves are not invisible, but they are so small that we cannot see them with the naked eye. If you run your fingers over the record you will be able to feel them slightly.

As the grooves are the music in the disc, and their interaction with the needle and the record disc is what produces the sounds. If the vibration of the disc is off, then the sound produced will sound weird as well.

Higher quality record players will reduce or eliminate any vibrations caused by the platter turning or the needle on the record which will help improve the sound quality as well.

4. The rotation speed of the record player

The record rotates to produce music. The rotation speed of a record is usually the same for all record players, but the rotation can change.

Due to constant usage, or another type of issue, the rotation speed of the record player may change. Once this occurs, the record player will rotate faster or slower depending on the issue that the player is having.

This will cause irregularities like skipping portions of the music or the music might be slightly higher or lower pitched than normal.

The speed change might not be noticable if you are watching it but the record will often sound “off”.

One way to check this is to borrow a player from a friend or buy a different one and play a song on your player and then replay it on a different player. If the artist’s pitch changes then you have an issue with your player that needs fixed.

Want to learn more? Check out this video below where they compare a brand new vs a 1970s turntable. 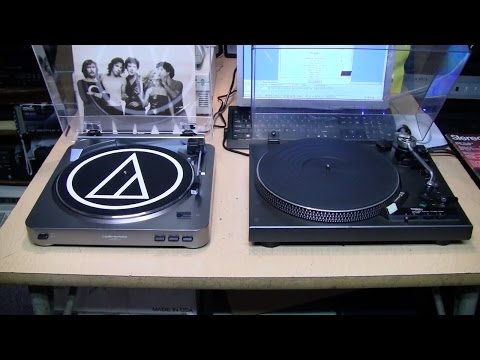 While record players are made in the same way, the sound they produce is different and can be altered by other factors as well. For the best sound quality, buy durable record players and not the cheapest one you can find.

Keeping your record player in good condition through regular maintenance can also help keep the sound quality as high as possible for long periods of time.