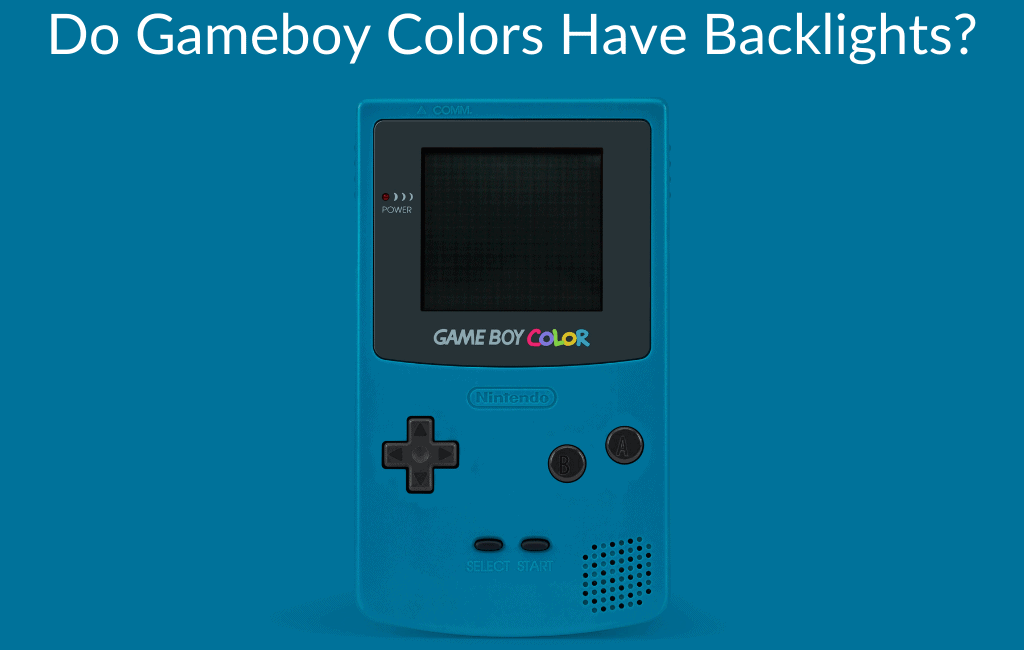 You know how it goes, you are having fun playing your Gameboy and you don’t realize how dark it is getting outside until you look up and the whole room is dark. It is hard to see your Gameboy, but you don’t want to stop because you are on a new high score! Nintendo saw the need for a backlight on their Gameboys and has come up with a solution.

So Do Gameboy Colors Have Backlights?

Most of the original Gameboy Colors did not have a backlight but you can modify the Gameboy to make it backlit. Nintendo has also made it possible for the Gameboy to have backlights upon request.

For those of us that already have a Gameboy without a backlight, we will explain in this article how to get a backlight on your Gameboy, so keep reading or watch this video!

Step by step guide to add a backlight

The question that comes up every time in our mind is why does Gameboy even need backlights when people are happy with the current versions? The game looks extremely good with the original hardware, and by adding artificial lights, it might change the great look of the Gameboy.

Everyone would love to have a brighter screen that is compatible with the Gameboy. Just follow the instructions given below, and you’ll end up having backlights in your Gameboy.

Note* If you can afford the backlight version of Gameboy, you can simply head towards the nearest gaming shop or online shop of Nintendo and place your order.

The first step is to gather all the things you will need such as; replacement screen, screwdriver, and tools to open the Gameboy. Once you have everything ready, you are all set to move to the next step.

Now, the second step is “Disassembling” the original Gameboy and identifying what model you are currently using. Take your battery cover off, and you’ll be able to see the model and other information written on the back of the battery. This information is important because the numbers will indicate which type of accessories and cable you will need.

If the number on the motherboard starts with 0, then you’ve got a pin 40 model. But, if it is a 1 written on your motherboard, then you will probably need a pin 32 model.

Now, all you have to do is to open up all the screws with the help of your screwdriver and bring the motherboard out of the Gameboy case. Make sure that you disconnect the ribbon cable from the top of the board.

The replacement screen will unfortunately not fit directly into the Gameboy’s case because the size of the screen will be bigger than the case. You will have to cut some of the plastic from inside of the case with the help of a box cutter, knife, or any other sharp tool.

The easiest way to do it is to mark out where to cut and you willl end up getting your desired results. This will save you a lot of time, and with the help of sandpaper, you can smooth the inside area of the plastic without any problem.

Now, fit the Gameboy’s screen in the case along with the buttons, rubbers, conductive pads, and motherboard.

Note* Don’t forget the buttons “L & R” because most  people forget them and they have to redo all the steps.

Now, once you have placed everything in the case, it’s time to rejoin the ribbon with the motherboard and to the screen connector. Don’t forget to attach the red wire to your motherboard as well.

In this step, you might need to heat up a soldering iron because you need to supply power to the screen. This can be done easily by soldering the red wire to the left leg of DA1. The wire will connect automatically with a gentle push. Remember, never use force to connect the cable.

As you have finished the steps listed above, it is finally time to turn on the device and say hello to the new and improved Gameboy!

The process may look easy, but it is not because it has a lot of complications. We would recommend you  have the new Gameboy that already has backlights mod, but if you can’t afford it, then follow the steps and instructions given above.

Can you play the Gameboy Color in the dark?

You can play the Gameboy Color with the help of Lamplight or Flash Light, but it can’t be played with complete darkness until you have added a light mod in your Gameboy. Many people are doing this as it is a great way to be able to play your Gameboy Color without having to hold a flashlight, or keep the light on when they are playing a game before bed.

Can you increase the brightness of the Gameboy Color?

In short, No, because they have hidden this feature from the player. This is why few people need “Extra Light” to play at night. The good thing is that you can order backlights mod with your Gameboy if you want additional lights. Many people are doing this as it is fairly inexpensive and easy to add to your Gameboy Color. These light mods are available in many places, but this is the best place to get one.

Which Gameboy Color has a backlight?

Although there was not ever a Gameboy Color that had a built in backlight, Nintendo did make a portable divide with a backlight. It was called the Gameboy Advance SP. The Nintendo handheld device was released in September 2005. It was instantly a hit as everyone wanted a handheld device that had a backlit screen.

By the time the Gameboy Advance SP was released here in the United States, Nintendo had fixed the problem of the screen not being bright enough. The newer Gameboy Advance SP had a backlit screen that could be seen easily in any light now! Although today this did not seem like a big deal, this was the first ever handheld device that was back lit. All other handheld games at this time were front lit or not lit at all.

Now that you know about adding a Gameboy Color light mod to your device, you can see why so many people are doing it. If you are super cheap though, they do make a tiny light that can clip onto your Gameboy and light up the screen so you can play in the dark. They are extremely creap, and are available here. No matter which route you choose to go, being able to play your Gameboy Color at night time is one of the best decisions you will make as you will find far more time to play it in the dark.

Most people do not realize how much they would use something until they have it. This is one of the items that should be on everyone’s must have list so you can have more time to play your Gameboy Color.