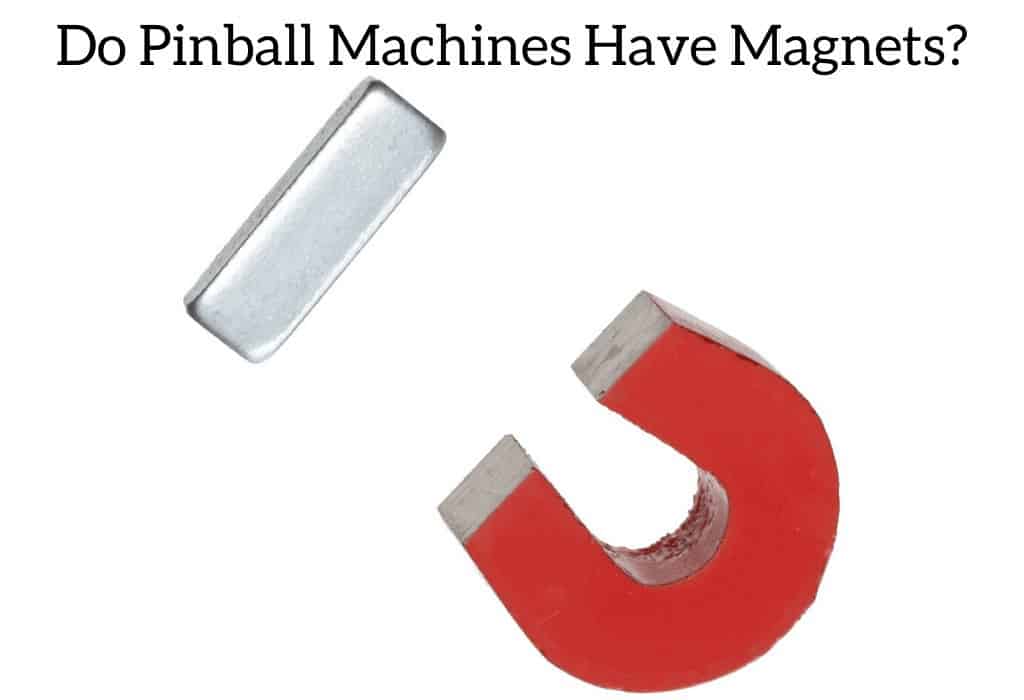 Have you ever gone to your favorite arcade and looked at the pinball machines? They’re fascinating. Perhaps one of the biggest questions about pinball machines is what makes them work. Every pinball machine is constructed differently, but do these flashy devices work with magnets or something else?

Just because pinball machines are super fun to play doesn’t mean they are easy to understand, which is why some people might think that the devices have magnets. This article will discuss the reasoning behind why someone might think there are magnets and which games do utilize magnets for gameplay.

If you want to see some current pinball machines or other retro arcade machines just click here.

Are There Magnets in My Pinball Machine?

Have you ever started to play pinball only to become incredibly frustrated with the game? It seems like every time you want the ball to go into the hole, it magically can’t get there. But when you don’t need it to go in the hole, it can land inside with no problem. Is this the pinball machine making sure you don’t win by utilizing magnets or are you that unlucky?

Well, we hate to break it to you, but you’re that unlucky. Pinball machines have virtually no way of knowing where you need the ball to go to win. The pinball machine isn’t like a slot machine that can tell itself to win or lose. It’s all up to the player.

This can put your magnet worries to rest. Most pinball machines do not use magnets during gameplay. Although it might seem like little magnets are getting in the way of your incredible win, it simply is not the case.

So, why do you keep losing the game? In a way, pinball machines are like slot machines. They are designed to make money, and they can’t make money if all the players win. However, pinball machines are not ‘smart,’ and there’s no way to rig them. The devices will be leveled or adjusted to make it more difficult for the player to win, but most of the time, this does not include the use of magnets.

The gameplay in a pinball machine does not typically rely on magnets at all. The informational blog “How Pinball Machines Work” by Shel Brannan explains that there are many components that make up the playfield of a pinball machine – and magnets are not included.

In most pinball machines that are void of magnets, the point of the game is to use flippers to keep the pinball from falling into the drain. The flippers help to keep the ball on the playfield, and there are targets, bumpers, and holes that you must hit with the pinball to score points.

The gameplay is simple, but there are measures in place to prevent players from winning every game. These measures don’t involve magnets, though. They include strategies like the incline of the playing field. If you are having trouble winning, familiarizing yourself with how pinball machines work is one of the best ways to build a winning strategy.

Do Any Pinball Machines Have Magnets?

Most pinball machines that contain magnets will make it evident that they serve a purpose for the game. They will also be pointed out in one way or the other, as you will probably need to use them during gameplay. For instance, in the pinball game Don’t Shoot, the ball needs to be trapped – and that can only be done by utilizing a magnet.

Another great example is the Black Knight. When it comes to this pinball machine, magnets are used to serve the purpose of stopping the ball from falling into the ball drain. This is essential for gameplay.

The magnets in a pinball machine are described as electromagnetic. Some of these magnets are electrically charged and are placed below the playfield. They are designed to either increase or decrease the speed of the ball or make the movements completely unpredictable. They may also be used to stop the ball altogether or control the ball.

Above the playfield, though, electromagnet use is designed to move the ball to another location. Sometimes the magnets can be controlled using flipper buttons, as is the case with The Twilight Zone pinball machine.

The good news is that there are no known professional pinball machines that utilize electromagnets below the playfield. This would contribute to much harder gameplay that results in an increase in ball losses, which would significantly impact how often a player would win the game.

Are Magnets a Good Thing When It Comes to Pinball Machines?

In some pinball machines, magnets are necessary for gameplay. In these instances, magnets are a good thing and beneficial to the pinball machine player. That is, of course, if the magnet is located above the playfield and can be easily noticed by the player. These magnets can operate in several different ways, perhaps the most prominent way being to prevent the ball from rolling into the ball drain.

The only time when magnets are harmful to gameplay is when they are found underneath the playfield. You are not likely to find these in most arcades, though, as there are no professionally made pinball machines that utilize magnets beneath the playfield. This would make the game infinitely harder for the player, and the pinball machine would likely stop being used altogether.

What Are the Top Pinball Machines that Use Magnets?

You are probably curious about which pinball machines use magnets for gameplay. We found this stellar list of the “Top 10 Favorite Magnet Action in Pinball Machines” that was determined by players in the pinball community.

Our previously mentioned Black Knight game came in at number 8, but here are some other excellent magnet pinball machines you might want to try:

Many of these games can still be found in arcades across the country, especially the arcades that specialize in retro games and pinball machines. Go ahead and give these magnetic pinball machines a shot and see how the gameplay is different than regular pinball machines that are void of magnets.

How magnets are used

Some people may wonder whether a pinball machine has magnets because they seem to be consistently losing. Although it may seem like magnets could be the root of all your pinball problems, it is highly unlikely. The only pinball machines that utilize magnets are easily found above the playfield and serve a purpose to help the player, not hinder him.

You should not have to worry about magnets being found on your game – especially if you are playing at an actual arcade. Unless the pinball machine was specifically designed to utilize magnets for gameplay, magnets won’t be found in the machines to deter you from winning. Although I always seem to lose the ball down the side, it is not a magnet as much as i would like to claim that it is. If you want to try one of the best pinball machines that do use magnets, you can search your local area for arcades or other establishments that have one!