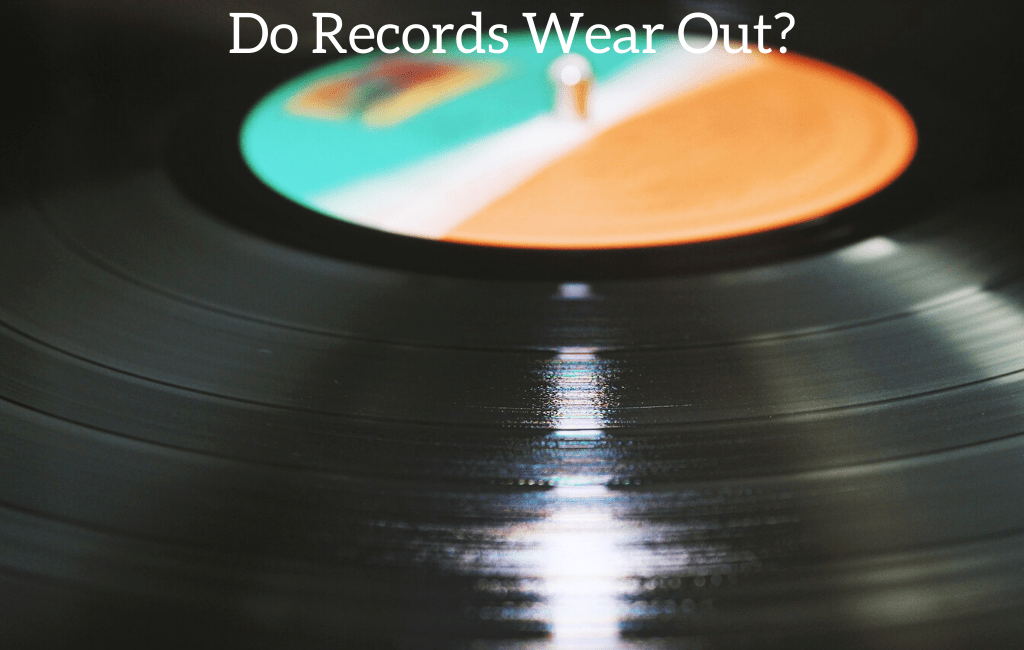 Heat warping, scuffs, dust, and scratches can all be issues for vinyl records. But what if you are extremely careful with your records and never damage them at all? Will they last forever?

Do records wear out over time?Unfortunately every time that you play a record you are slowly degrading the record itself. The way a record is played means that over time the needle/stylus is slowly damaging the record as it digs into the grooves. This “damage” is part of design but it will prevent records for lasting forever if you listen to them.

Of course if you never listen to your records and leave them in storage then hypothetically they could last forever but what is the point of that?

Many people believe that each record will last through a few hundred plays before the quality noticeably degrades. At that point the record will still play but the sound quality won’t be as good as a brand new record.

Some people even report comparing a record that they have listened to for decades with an identical record that was in storage and the sound quality is quite poor on the well used copy.

The record in either case will still play but you won’t have as good of sounds especially for music in the higher frequency ranges.

To see the most popular accessories for your records and record player just click here.

Is playing a vinyl record with a stylus a destructive process?

Anytime that you put your stylus onto the record that stylus is slightly damaging the vinyl as it glides through the grooves. This is especially true if you aren’t careful with keeping your record and stylus clean.

Many people go weeks or months without listening to a record and then just start popping records onto their player and start listening. That is the wrong way to do it.

If it has been weeks or months since you last listened to a record you should clean the dust and dirt off of the record as well as the stylus. A small layer of dust might not seem like that big of a deal but not cleaning your records and stylus before playing will cause you to wear out your records even faster.

It can be a destructive process playing a vinyl record  because there will be diminishing sound quality because of the wear to either the stylus, your vinyl, or both.

Many things can help in reducing the record wear, such as making sure to use a turntable and tonearm that are high-quality and correctly adjusted. A cheap record player will wear out your records much faster than one that is of higher quality.

For example, the “retro style” players that have popped up in recent years are said to have over 3x the amount of force on the arm than they should have. That means you are wearing out your records on that player 3x faster than on a higher quality one.

As your record begins to wear out you will start to hear less of the music and more of the pops, cracks, and clicks. This is especially true if you have a record player that picks up a lot of the inconsistencies of the record.

There might also be some noise because of the dust and dirt lurking in the LP grooves. You can reduce the noise level to some degree by a quick bath and rinse in distilled water. There is no need for fancy record cleaning machines or expensive liquid cleaners to clean the records. You can do it just by distilled water.

Are LPs delicate and can they be easily damaged?

Records are considerably less delicate than most people believe. I have seen many people (such as in the video below) who are actively trying to break a record and still have a hard time doing so.

However just because breaking a record into pieces isn’t easy that doesn’t mean it is hard to damage a record to wear it hurts the quality.

All it takes is to store your records in front of a window with the sunlight streaming through for a few hours or days (depending on the time of year) and your records will be warped and unplayable (until you flatten them back out).

You should always try to take good care of your records if you don’t want to get them scratched and damaged. It is relatively easy to scratch, warp, or ding a record and each one of those things will severely hurt the quality of the music.

You should not leave naked LPs sitting on the floor and should not touch them with dirty hands. It is also a good idea to only touch the edges of the record as the oil from your hands can cause dust to gather on those places.

After playing, instead of leaving them open to the environment, you should always put them back in their sleeves. This helps in making sure that your LPs will stay undamaged a little longer so that you can enjoy them as long as possible.

Does a worn-out stylus affect the noise?

You should not use the worn-out or damaged stylus to play records as they are the main reason for inducing noise as they are gouging the grooves with each play. If you have noticed that your music quality had decreased substantially on all of the records that you play then your stylus could need replaced.

Replacing a stylus is relatively cheap and simple but it can have a huge effect on the quality of your music.

You should also make sure to set the stylus tracking force to the recommendation of the cartridge manufacturer.  If the force setting is too high or too low it can cause the record to make noise during playing and also wear out the record faster. Record noise outside of the music should be minimal if you have a good player, stylus, and records.

How to get many good sound cycles?

There can be wear on the record because of the repeated playing, but if you keep it clean and you’re playing it with a stylus that is not worn, then there will only be a little bit of wear per play. Also, if you use a properly aligned stylus, then you would get a good sound for many play cycles.

Taking care of your records is the best way to extend the number of plays that your record can handle. This can be done by storing them properly, cleaning them regularly, and keeping your player in good condition.

The video below gives 7 helpful tips for cleaning, storing, and playing your records to help them last for many decades to come.

What is the difference between Wear and Damage?

There is a difference between wear and damage. According to studies, there might be no audible impact on the sound after 100 plays with wear from a small elliptical stylus that has 0.2 mils front-back radius tracking at 1.5 grams. There is comparable wear with a tracking force of 3 grams if 0.7 mil colonial is used that is having a larger contact area.

While as compared to wear, there can be audible degradation in just one play because of the damage from the worn or mistracking stylus.

As you can see from the above information, actually taking care of your records is the most important part of having them last as long as possible.

There can be wear and tear on your records but under normal circumstances they won’t wear out to the point of not working for many hundreds or thousands of plays. The sound quality will go down after a few hundred plays but the record will still be able to be used.

Records will have more wear if the stylus force is heavier so avoiding a cheap player that has 3-4x the amount of force as is necessary will help prevent your records from wearing out prematurely.

You will normally see a reduction in volume after 30-40 plays, and after 100, it will become quite noticeable. Of course those 100 plays could take you over a decade to get through if you only listen to a record once a month (many people don’t listen to every record even that often).

As your records start to wear out there will be an increase in both high-frequency fading and ticks. This is especially true if you don’t handle your records with care, have a worn stylus or don’t clean your records on a regular basis.

You should not drop or pick up the needle in the middle of a record. It is always best to let it play the whole way through as when you drop or pick the needle up you will often damage the grooves by doing so.

Keep your records clean, use them carefully and you should be able to enjoy them for many decades to come!