Table Of Contents show
1 Who draws in the Rummikub Game?
2 Drawing the Joker in Rummikub
3 Strategies of drawing in Rummikub
4 How to play Rummikub
5 History of Rummikub
6 Winning at Rummikub
6.1 Conclusion
6.2 Related Posts:

Have you ever played the game Rummikub, but you don’t remember if you have to draw every turn? Maybe you just can’t remember how many tiles you start with. Well, we are here to answer all of your questions.

So do you have to draw every turn in Rummikub?

Although many people think you have to draw every turn you take similar to a card game, that is not true. Rummikub is designed for the players to only draw a tile if they are unable to play on the board anywhere or are unable to get “out”.

If you want to know how to play Rummikub, you will want to keep reading this article. If you are in need of a new Rummikub game or want to get the 6 person one you can find them by clicking here.

You can also watch this video below to learn all about the game of Rummikub. 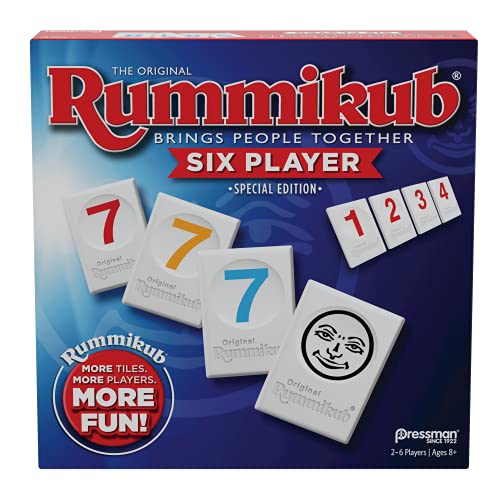 Want to play Rummikub with more than 4 players? Then you are in luck.

This Rummikub game is specifically designed with extra tiles and stands so you can play with 6 people instead of 4.

Who draws in the Rummikub Game?

A group is formed when three or four tiles of the same numbers are combined but they must be different colors (duplicate colors cannot be played in a group).

A run is formed when there are three or more numbers of the same color played together in sequential order. Playing a group or a run makes a set; this can also be called a meld.

On the first turn, the objective is to lay either groups or runs that add up to at least 30 points; if your tiles are not adding up to at least 30, you then must take a tile from the pool to try to get above the 30 points to “get out” so you can begin playing on other people’s tiles.

You cannot play the drawn tile until the next turn. This applies to any tile drawn during the game.

You can draw a tile if your tiles are not adding up to 30 but in doing this, you cannot play the drawn tile until your next turn. It is a players’ job on every turn to scope out places where their tiles can be added to a run or a group that is already out assuming that they too are “out”.

Playing tiles in the game is commonly referred to as melding. There are a few different ways to meld;

The first is by adding a specific tile to an existing run or group.

The second is by collecting the fourth tile from a run or group to finish your set or run.

Drawing the Joker in Rummikub

Rummikub rules state that the Joker, which is red or black, can be played like a “deuces wild” similar to the card found in card games. This means each wild represents any tile designated by the holder.

When caught with one in your rack after the winner plays all of their tiles, the Joker will have a 30-point penalty against you. This means you have to be strategic when using the Joker.

Strategies of drawing in Rummikub

The best way to play Rummikub is to have a strategy. Keep your eyes on the tiles and your head in the game. You will do this by maintaining your focus and concentration.

Lack of focus and attention usually leads to you missing out on moves to make or missing a way to take an advantage in the game.

Rummikub demands that you continually analyze ways to rearrange and add tiles to the table. It is wise to keep track of what tiles have been played for the future.

Sometimes you can be watching a run with eagerness for a while and end up missing out to add to the run if you do not play on that run when you get your first chance.

You can also hold off on laying a fourth tile for a group or run as that will allow you to play a tile on the next turn instead of picking from the pool.

Using your initial set to get rid of your higher value tiles is beneficial as well because if someone shouts “Rummikub” early in the game, you don’t get caught with a lot of points in your rack.

Another tactic would be to have four of one number but only play three of them in a meld, retaining the fourth one to be your last tile played to win the round.

How to play Rummikub

The game Rummikub is based on tiles and is designed for 2 to 4 players. There are usually 106 tiles in the game and they are typically valued 1 to 13 in four different colors with two copies of each and also two jokers.

Each of the players draws 14 or 16 tiles at the beginning of the game. Next, the players take turns putting down tiles from their racks into groups of at least three. Someone has to draw a tile if they cannot play or cannot get “out”.

To get out you have to have a set number of points to lay down (normally 30 but many people choose smaller numbers to make it easier).

In a version called Sabra, the first player who uses all of their tiles scores a positive score based on the total of all the other players’ hands. All the while the losers get negative scores.

A main characteristic of the game is that players can work with the tiles that have already been played by the other players.

This game usually has a pool of tiles, which consist of 104 number tiles and two joker tiles. The number of tiles has values from one to thirteen. The tiles contain four colors, which are blue, red, orange, and black.

Every single combination of color and number is represented two times. Each player has a rack to store tiles without revealing the face of the tiles to the other players in the game.

Ephraim Hertzano invented the Rummikub game. He was a Jew from Romania. Ephraim is known to have made the first sets of the game with his family in their backyard. He sold these sets as a door to door salesman and on a consignment basis at small shops.

As the years went by, the family licensed the game to other countries, and it became Israel’s game that sold the best via export. In the year 1977, the game became a bestseller in the United States of America.

There are three different versions of the game which are known worldwide. They are American, Sabra, and International. Present Rummikub sets, which are the modern ones, include only the Sabra version rules.

The objective of the game is to place all your tiles on the table as part of a set or run. When someone successfully does this, that person can shout out “Rummikub.”

Losers then add up the value of the tiles that they’re still holding on their racks, and the score is written as a negative of their total score. The winner of the game gets a positive score that equals the total of all the losers’ negative points.

What usually helps when checking the figures is the winner’s score should equal the total of the minus scores of each round and also in the final tally.

If you are playing with younger players you can simply forgo the number counting after each round and have the winner of the round just be the winner and then start the game over agan.

There are sometimes rare cases that all the tiles in the pouch are used before any player shouts “Rummikub”. When this happens the player with the lowest count on his rack wins that round. The losers add up their tile’s value and subtracts it from their score.

The result is scored as a minus amount.

Total of all player’s negative scores is then added to the winner as a plus quantity. Then you place all the tiles back in the pouch after scoring the round and start the next round.

You then begin the next round by repicking tiles. The person who wins the game is the one who first reaches the score that is determined before beginning (normally 200-300).

If you don’t own the Rummikub game, or have missing pieces, you will want to purchase one so as to be able to enjoy it with friends or family.

This game is such a fun game for the whole family, as well as a strategic game it is bound to make everyone laugh and have fun every time it’s played.

If you want to purchase the game, you can find it on Amazon here.