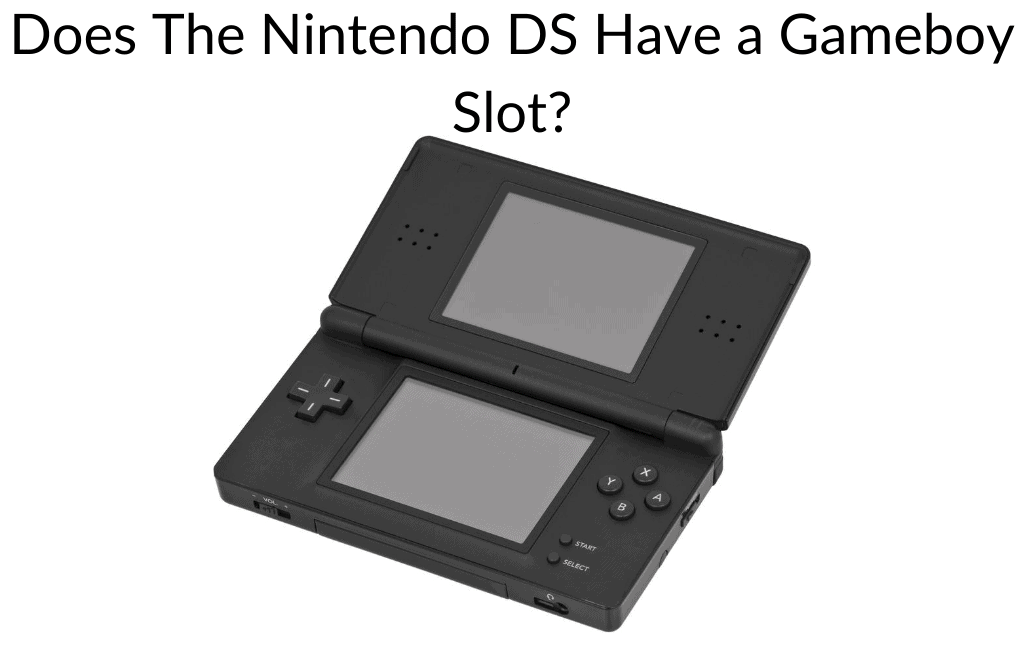 Does Nintendo DS Have a Gameboy Slot

Nintendo DS does not have a Slot-2, and therefore cannot take Gameboy cartridges. A Nintendo DS and DS lite have a DS game slot and a game pak slot (Gameboy Advance games). A DSi has a DSi game slot, two cameras (one on the inside one on the outside), and an SD card slot. The only slots are: 1 DS game slot one sd card slot.

For more information about the Nintendo DS, please keep reading and check out this video!

What If Your DS Gameboy Advance Slot Won’t Play

There are a few Nintendo DS products that are not fully compatible with the DSI. You cannot play the Guitar Hero on Tour and Guitar Hero Decades. Some features also aren’t available in newer games such as Pokémon Diamond, Pearl, Platinum, and Dash, and Pokémon Mystery Dungeon, the Blue Rescue Team.

However,  there may be DS games that have certain features that can only be used for Nintendo DSi. This will not play on Nintendo DS or even the Nintendo DS lite system at all, however , this will then be mentioned explicitly on the new product’s packaging. You can check the Gameboy game page  on the Nintendo websites for updates.

If you owned any of the original Gameboy or Gameboy color games, the DSi is not able to play them. This also includes Gameboy Advance games in the multiplayer mode.  Why are there limitations for DSi with a game boy slot? You might already know the answer to this question. There are two main reasons that the Nintendo DS and DS Lite are not compatible with older software.

The DSi system is designed for wireless play and therefore lacks a link cable port. In such a case, older games are not intended to use the wireless feature, and they can not communicate for multi-player games. The system also lacks a specialized processor that is required to play most of the Gameboy games.

The Nintendo DSi system has an older processor and it would be very difficult to add another processor to an already highly complicated architecture. The processor was not included in the final design of these systems.

Some users might have a concern that most games allow you to transfer data between the Nintendo DS game card slot. The Gameboy, particularly Gameboy Advanced Pak or games that need the use of an accessory in the GBA Game Pak slot might not be able to be used properly without the right processor.

Despite the limitation, there is a way to play the old Gameboy games on the Nintendo DSi. You can try to download the Gameboy Advance DSi Emulator, which makes it possible to play Gameboy Advance games using a backup commonly known as Gameboy Advance ROMs.

Use the special DSi flash card adapter though, for MicroSD cards. Then use the emulator and place the Gameboy Advance games on the Micro SD card. This is known to be one of the best ways to download DSi games on your SD card.

The most puzzling thing is why does the 3DS have Gameboy Advance mode, as they have written on their website. Gameboy Advance games in the AGB_FIRM mode on the 3DS run with 100 percent accuracy as if they’re on the Gameboy Advance hardware. However, you will have to put up with the dark tint and the blur of the screen, unless you can remove it with CFW.

Why would Nintendo go through all the trouble of making a 3DS run Gameboy Advance games, but not the DSi when the latter is much closer to the DS family and by extension Gameboy Advance than the 3DS?

Does DSI have a Gameboy slot? There is a  complicated answer.  The bottom line is, DSi is a section of the Gameboy Games Pak. The extra cartridge slot is located on the bottom of the console as well. Yet, this is limited. The Nintendo DSi was only backward compatible with Gameboy titles. It means that if all you owned were Gameboy games, you were out of luck. The Nintendo DSi is compatible with Gameboy Advance games and regular DS games. To be fair, the DS Lite has a DS slot on top and the game boy slot on the bottom and also has a microphone and dual screens.

DSi does not have a Slot-2, and therefore cannot take Gameboy cartridges. A Nintendo DS and DS lite have a DS game slot and a game pak slot (Gameboy Advance games). A DSi has a DSi game slot, two cameras (one on the inside one on the outside), and an SD card slot. The only slots are: 1 DS game slot one sd card slot.