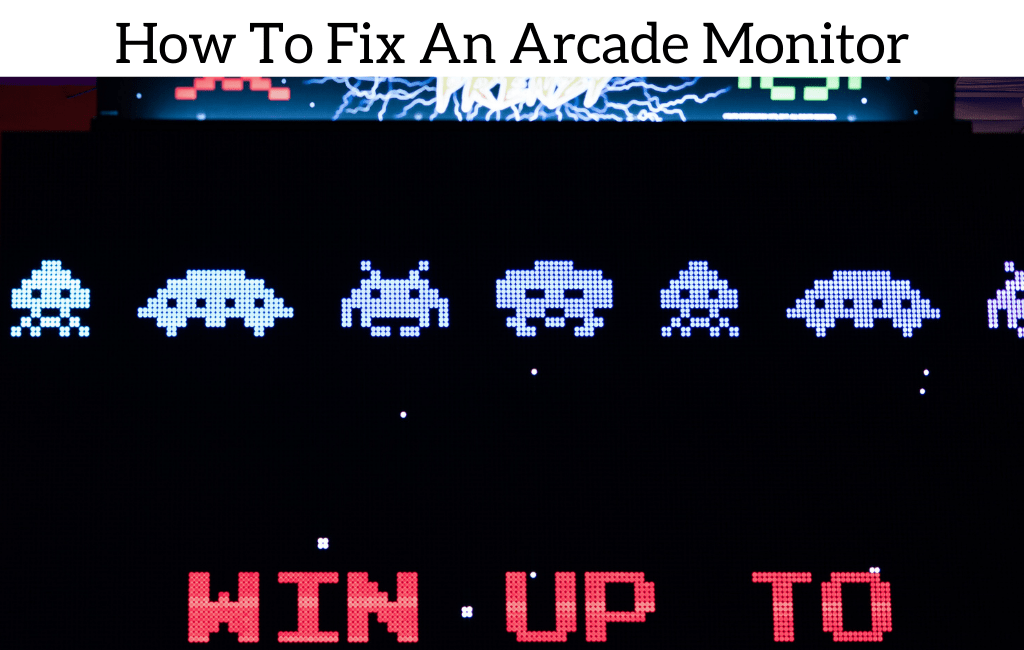 Do you have an arcade machine and the arcade monitor just stopped working? Maybe you are trying to fix it on your own and you are having problems? No matter what your question or problem is, we have the answer for you.

So How do you fix an arcade monitor?

Although some people have tried to replace the arcade monitor on their own, below we will outline the best way to replace it to make sure you do not break anything else in the process of fixing your machine.

If you want to know the exact way to replace your arcade monitor, you will want to keep reading this article. You can also watch this video which will show you how to do it step by step.

Are games the same today as they were?

Games have improved a lot in recent years. Games started as analog and were only black and white. After that they advanced into colors with the resolution being more pixelated. Soon after the games began to advance and gain better graphics. Next came the rise of the Gameboy era which was then beat by the PlayStation. Its era still stands today along with Xbox. Now we have even seen advancement into VR games. This is where a person can visualize and impersonate a character in a made-up world using special controls. Even with all the advancing technologies, there is always one game that seems to stand out in every era. In all of the eras, the game that stook out the most was the arcade games.

Arcade machines have been available ever since the 1970’s. Even today they are popular among most people! People all over the world challenge each other in arcade games through high scores. The best part about arcade games is that they never go out of fashion and they are never discriminative. They are for all ages! Every game is catered to young people, teenagers, boys, girls, men, women and everyone in between.

Below we will discuss what makes the games unique compared to other games.

They are simple to play

Unlike the PlayStation and many other modern games, arcade games only contain a few buttons. This means that their games have basic functions which makes them easy to play.

I’m not saying other games are not competitive, but modern games have shifted their focus into graphics and user experience. This is why they haven’t been putting emphasis onto the competition of the games. If they incorporate it in the game it’s mainly for online multi-playing and not just the game itself. Arcade machines have always had systems of high score which increase the competition of the game. The best thing is anyone from all over the world can play the game and compete against someone who was previously there!

A PlayStation may cost upwards of $300 depending on the kind of store and the package you purchase. This is why many people do not have the PlayStation. Although they would love to have it and play it, they simply cannot afford it. On the other hand, you only need a couple of cents to play an Arcade game. Based upon the cost to play an arcade game, you could play an arcade game for an entire year, for the price of the one gaming system. This price does not even include buying any games for the system or any in game purchases you will buy through the year.

They don’t contain many updates and are easy to keep updated.

Games like the Xbox have already released more than 5 versions in which each can’t relate to the other. In consoles like this, you’ll have to keep purchasing the new console and new games just to keep getting the best experience possible. Arcade games are not like this in the fact that they do not need updating to have the best experience.

They save you the burden of buying games.

In Consoles, you are obligated to buy the game every time which can be very expensive. On the other hand, you don’t have to bear the cost of buying an arcade game because the owners are the ones who are buying the machine and maintaining it.

Parts of an arcade machine

This is trim that shields the wood edges of an arcade machine. The trim is usually made from plastic material and it’s available in many colors making your arcade machine customizable

This is the screen of the arcade. This is used to display the visual characters and the setup of the game. They vary in sizes from 19 inches to 35 inches. This is the most essential part of the whole arcade machine. Since the model is old it uses the same mechanism as all other plasma screens in which is the use of the Cathode Ray Tube

This is the part that is used to shield the monitor. The material is made from glass, cardboard or plastic depending on the design of the arcade machine. This is also the part that contains the artwork of the games.Marquee

Just like the bezel, this is a piece of plastic that contains the game name and its artwork. It is located on the top of the machine

This is the artwork that is seen on the sidewall of the game.

This is the panel that shields and covers the joystick and the buttons of the game.

This is the place where all the played coins are stored. It contains a container which acts as a reservoir for the coins or tokens.

This is the place where you insert the token coins to play the game.

This is the sound propagator of the game. It’s all where the music and sounds of characters are displayed.

Even though they are very durable they usually need maintenance. This is because most of the instruments tend to wear down after a while. One of these instruments is the monitor. It’s a common thing to see the monitor of the arcade machine fail or blackout after sometime when an arcade machine is not properly maintained.

If you have a black monitor, you will need to check to see what is exactly wrong with the monitor.

The following tools are necessary to fix a black monitor

What to check if the screen just goes black.

Now that you have determined what is wrong with your arcade machine and fixed it, you can go back on your way of playing the best games ever created!