Table of Content show
1 What is pool
2 CAN YOU SHOOT BACKWARDS IN POOL?
3 DIFFERENCE BETWEEN POOL AND SNOOKER
3.1 Conclusion
3.2 Related Posts:

Have you ever been playing pool and thought about shooting backwards, but you weren’t sure if it was allowed? Maybe you have seen someone do it, and thought it was against the rules. Well, in this article, we will go over everything you need to know about the rules for pool.

So can you shoot backwards in pool?

If you want to know more about pool and what you can and cannot do, you will want to keep reading. You can also watch this video to learn everything you need to know about the rules for pool.

Pool is a cue game that has been in existence for more than a century. It requires a player to use the pool cue and cue ball to hit the 15 object balls into the six ball pockets. These pockets  lining the rail of the wooden cabinet that makes the table of the pool table. The table is topped by a slate slab in one or three pieces and is covered by a piece of felt that is any color that the person buying the table wants. Most tables come with a green felt already on the table unless you special order one.

If you want to know exactly how a pool table is made, you will want to check out this short video.

This game was initially played outside and has been in the making for centuries. Today it is held to be a gentleman’s game and it is world famous as one of the most spectacular games to watch for its fans. There are many trick shots that can be made in this game that make this game a rousing spectator game. Basically it is very interesting and has avid fans all over the world and is known for trick shots that the players come up with on the spot more often than not. 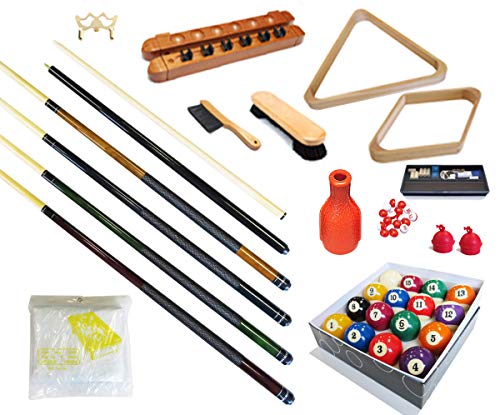 CAN YOU SHOOT BACKWARDS IN POOL?

Essentially this is a trick that pool players do not make but snooker players do. Snooker players are another sect of the cue players and are as invested in tournaments and the like. However, the rules for snooker vary from that of the pool and some of the tricks that are possible in snooker due to the different rules are not possible in pool.

DIFFERENCE BETWEEN POOL AND SNOOKER

Balls are the main components of both the game as the game ends after all the balls are pocketed. These balls are distinguished from each other in form and weight. How these balls are played differ by the rules as well. Trick shots are different as well when used correctly in correlation to the rules followed in both the different games. Both the games are dependent on the placement and the pushing of the balls easily.

Both of these tables are somewhat the same in construction. However, the cloth used on both the tables are not the same. The cloth on a pool table is made so that the ball travels slower and doesn’t shoot off in a hurry. It is the opposite case with snookers where the balls must travel very fast in response to hit the pool cue.

The rules are very different between the pool and snooker games. For example, in snooker, the balls that are coloured yellow, blue, brown, green and black and pink are taken as the object balls. It also has three striker balls instead of the usual single cue ball in pool to use as a striker. These are just a couple of the reasons that snooker is very different in both execution and look as a cue game from the game of pool.

Pool games in the meantime have 15 colored balls and one cue ball that is the only striker. There is no rule against striking the balls in any specific order so long as the cue ball is not pocketed. This is why it can be clearly seen that both pool and snooker have different rules and are quite different versions of the cue game that makes both a very different game to play and view as a spectator.

Pool requires that the pool cue be anywhere between 57” to 58” in length and can be broken off into two or be kept in one piece. The tip diameter itself is very small at 11 to 14 mm. the holding ends are usually kept in linen wrap. Snooker cues are however from 57” to 63”. Tip diameter is even smaller than a pool cue at 10mm. They are made mostly of ash wood in comparison to the hard maple wood pool cues. Snooker cues also have no holdings.

Then there is the matter of the extension arms that snooker uses due to the largeness of the table. Such an accessory is not required in the case of pool because the table is comparatively smaller and hence does not need this accessory.

In conclusion it can be said that no, you cannot shoot backwards in pool. That is a trick shot restricted to only snooker, or if you are simply playing pool just for fun. You can also do this trick shot if you are doing trick shots with your friends.

There are many different trick shots that many people do when they play both games, but shooting behind the back in particular is one that most people are allowed to do when playing snooker and not pool.

When you play pool, you will have fun and enjoy playing the game as long as everyone follows all of the rules. If you are playing for fun and you agree that trick shots are allowed, there is no reason why you cannot shoot backwards though.

Pool has its own specification and trick shots and shots that are not trick shots but are tricky nonetheless. The same can be said for snooker but both differentiate so much that under no condition can be said to be the same game. Even though they are both cue games, they are entirely different cue games and that is all that makes the difference.