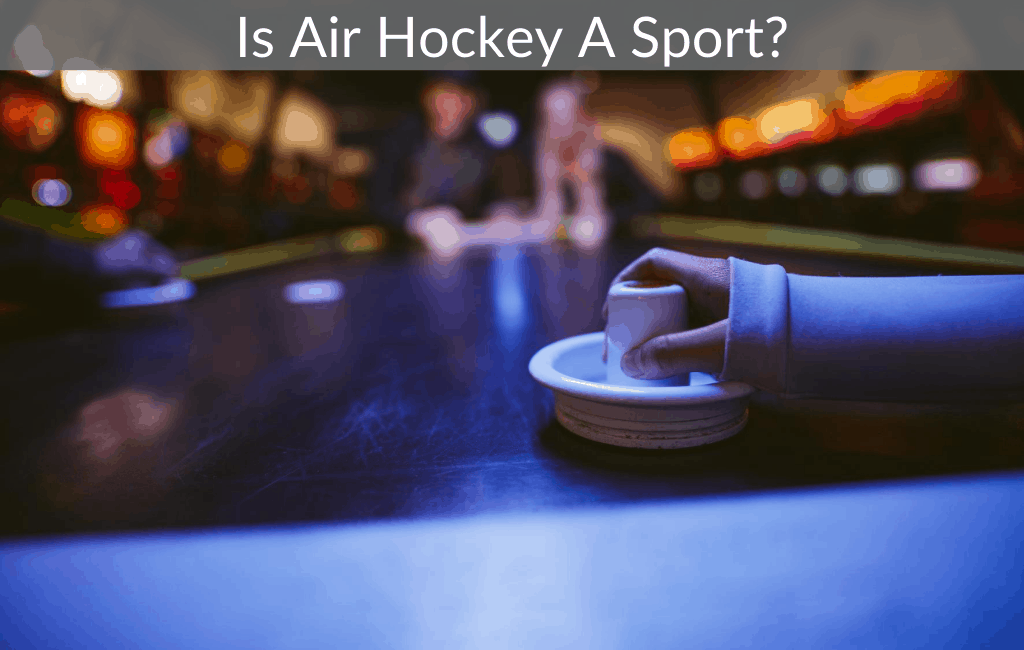 So is air hockey considered a sport?

Although some people do not consider it a sport, air hockey is in fact a sport. Even though it is not an extremely physical sport, based upon the requirements to play the game, air hockey is indeed considered a sport.

If you want to know more about air hockey being a sport you will want to keep reading this article. You can also check out this video to learn exactly how to play air hockey.

What is air hockey?

Air hockey is an arcade game that was first released in the early ‘70s. Similar to ice hockey, the game is about scoring points by achieving a puck in the other player goal zone. It is not a team game because only two players can compete at one time. Air hockey was very popular as soon as it was launched. Soon after, clubs of air hockey started to appear with their own rules and tournaments. Even so, air hockey clubs are mainly in the United States of America. Air Hockey is a sport with its own set of rules, gameplay, and tournaments.

Air hockey was released in 1970 and became very popular very fast. In 1973 was created the

first air hockey club in Houston, Texas: The Houston Air Hockey Association. In front of the

popularity met by this new game, they created the Texas Air-Hockey Players Association and

started to establish the rules of this new sport. The first tournaments were held at Houston

Pubs Carnabys as well as at the Houston University.

Because the game was getting amazing feedback, soon after, in 1975 was created the United States Air-Table Hockey Association (USAA). The newly created association dismissed all the previous rules of the game to create with the players the modern rules of air hockey as we know them. In 1978 the United States Air-Table Hockey Association organized the first world championship tournament and there has been a tournament every year since then. In 2015 the Air Hockey Players Association (AHPA) was created in order to promote the development of Air Hockey as a sport.

Both the United States Air Hockey Association and the newly created Air Hockey Players Associations work together to promote air hockey and even though they are two separate entities, they work together to organize every year the world championship of air hockey. Not only this, but they also work together and are in the process of getting air hockey to be considered an Olympic sport. If this happens, it will put everyone’s question about air hockey being a sport to rest. There is no denying that something is a sport if it is in the Olympics.

Air hockey clubs are mainly in North America. They are the largest clubs, as well as there are many other clubs that are located in Houston, San Francisco, Sacramento, Los Angeles, San Diego, Denver, Chicago, New York City, and Boston in the United States of America. There are a few clubs abroad and they include Barcelona in Spain, Saint Petersburg, Moscow, and Novgorod in Russia, and Most and Brno in the Czech Republic. Caracas in Venezuela used to have a serious air hockey club with three-time World Champion Jose Mora but the club ceased all activities in 1999. Air Hockey tournaments follow certain rules edited in a common agreement by both the USAA (United States Air-tables Hockey Association) and the AHPA (Air Hockey Players Association).

To play air hockey in a tournament you first need to have the right table. Forget about the

glittering colorful tables you find in a modern arcade, only the classic 8 feet tables are admitted to play in competitions. These tables are the Gold Standard Games 8-foot tables; some 8-foot tables from Dynamo; and the original 8-foot commercial Brunswick tables.

What are the rules of air hockey?

The rules of Air Hockey are simple. The first players to score seven points wins the round and the best score out of seven rounds wins the game. To play a game of air hockey there are a few rules you need to know. To start the match you flip a coin in order to know who will serve

A point is given when the puck enters the goal of the other player. A rebound of the puck or if

the puck is only halfway inside the goal does not count as a point. Serving switches between

players with every goal scored. Each player can only strike the puck when it is on their side.

The table is divided in two by a centerline which determines each player’s game field. When

playing, the player cannot go over the centerline, including his body; he has to stay on his side of the table. The stricker used to hit the puck cannot cross the centerline that divides the table.

Players cannot use the stricker to block the puck and hold it in place. Players cannot touch the puck with any part of their body: Fingers, hands, arms or any other parts. Every round, each player starts with a 10 seconds time-out. The time -out can only be called when the puck is on the player’s side. Once a round is finished, the players switch serving to start the new round.

Here are some useful tips to play like a pro and beat your opponent without mercy.

Be gentle with the stricker. New players have a tendency to hold the striker firmly but it is a

mistake. You need to hold it with three fingers, just like the pros do, and without putting

pressure on it to allow the fastest movement possible.

Hold onto the puck as long as possible. Again, a new player will want to hit the puck back as fast as possible but again it is a mistake. Try to slow down the puck in your designated area in order to be able to strike a precise shot. The same applies if the puck rebounds back into your side. Do not hit it hard, but again regain control of it before striking a winning shot.

Know how to defend your goal area. When your opponent is in control of the puck, it seems

logical to protect your goal area by keeping your stricker right in front of your goal. Again this is a mistake, the best defensive position is your stricker forward. This position will allow you to

and space in order to regain control of the puck. These few tips will definitely help you improve your gameplay and soon you will be the new shark on the local air hockey table.

If you really love playing Air Hockey, you might consider joining an existing club and if there is no club around you, then why not create your own for you and your friends? If you are good enough, there is nothing that can stand in your way. So go ahead and play; the world championship awaits you!