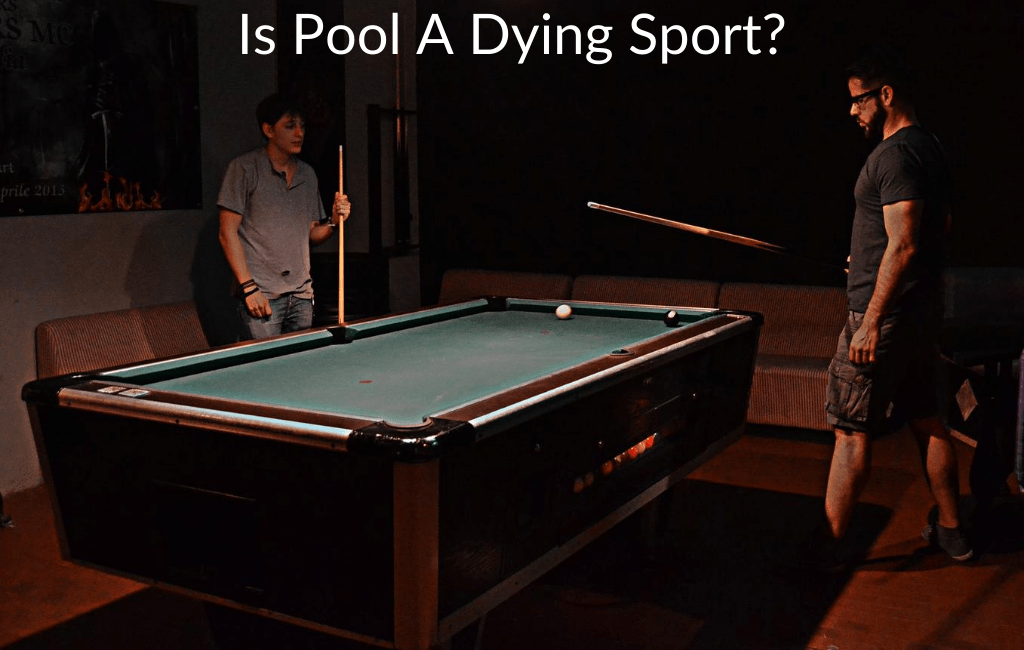 Have you ever been playing pool and wondered if the sport was dying? Maybe there used to be pool tables everywhere you went but now you noticed that there are not as many. Well, in this article we will go over everything you need to know about pool and if it is dying.

So is pool a dying sport?

Although pool is not as popular today as it was in previous years, it is not a dying sport. Pool continues to be a favorite sport for many people, and that is something that will likely never change.

If you want to know more about pool and why it is not as popular today as before, you will want to keep reading.

Pool can be simply defined as a game which consists of a table, and a maximum of six pockets along the rails. The goal of the game is to hit the balls into the pockets. It is played with a cue stick which needs chalking at certain intervals depending on the brand of the chalk. This chalk gives the cue maximum grip when hitting the cue ball. This is how people obtain the high spin shots.

Because there are so many other popular sports today, many people want to know about pool and if it is still popular.  The issue is that pool has faced a noticeable downward trend from years back until this day. Although it’s still played in pool halls, most people find it difficult to master, and in turn, easily lose interest.

When was Pool most popular?

Pool among other cue sports was lastly most popular around the mid-19th century. This is evident by the fact that the last major professional tournament was held in 1876.

Reasons pool is not popular anymore.

There are many reasons that led to Pool losing its popularity. These include a lack of opportunities to learn pool, the need for instant gratification, lack of space allocated for Pool as well as many others.

This is one of the major reasons that led to the downward trend of Pool. People used to be encouraged to play pool by the availability of a lot of playing halls. This showed how people held pool as a game of much value, by designating more space to it. However, the number of pool halls has significantly reduced. For example, a century ago there existed a total number of 830 pool halls in the city of Chicago. This number has since reduced to just 10 pool halls today. This, in turn, shows how the reduction in that special place dedicated to Pool has highly impacted negatively on the sport.

The film industry nowadays mainly associates pool games with crime activities or scenes. This may be due to the location of most pool tables nowadays, which are usually in bars and clubs. In these kinds of places, you also find strippers, waitresses who are trained to dress up to impress, and mostly alcoholic beverages. It is those same places that people find convenient to plan all their mischief and crime. In return, some people might not like being associated with all of those items. This is why the desire to maintain a good reputation has led to a huge fall in the popularity of Pool.

In some countries, young people are not allowed to play pool until a certain age. This, in turn, causes a lack of interest in most young people who were interested in the game. This may also result in young people looking at Pool as an old people’s game. This is why today, it doesn’t necessarily blend in well with their modern lifestyle.

There are however exceptional cases where you can get the privilege to learn pool easily from a close relative or guardian. In these few cases, you can learn about pool simply because it’s a family tradition. In most of these cases, the family usually has a pool table as well as all of the accessories inside their house. Although this once was a high end game, today, most people play it for fun, and everyone can own a pool table.

With a lot of people today exposed to a wide range of entertainment, it can prove to be difficult to maintain the popularity of Pool. The internet, for example, is a deep well that offers limitless entertainment options. Most people can use their phones or computers to play a digital version of pool rather than having to go and play in a certain pool hall or bar. Even though the previous generation enjoyed relaxing while playing a game of pool, today, many people would rather dance with their friends to go hang out and play games online. Even if the previous generation wanted to teach the next generation about pool, many people do not have the interest in the game that previous generations did.

The changing world has brought with it a set of advantages and disadvantages. In today’s world, most people are withdrawn from society and they tend to pursue shallow things. This is why some people can be withdrawn from what is important and the reality of life. People would rather watch video online, or play different games online than to take the time for a game of pool.

Back when pool was popular, there was not much going on, and everyone moved at a slower pace. Today most people are moving from one thing to the next looking for the next best thing. Most people are looking for quick ways to make money as well as instant fun that can be had. This is why most people today do not play pool. Pool has become a game that cost money to play, is that that cheap, and honestly does not give instant gratification. More often than gratification, you get frustrated with not making a shot, messing up when you hit the cue ball, scratching, and honestly just not enjoying the game. Even though there are a lot of people that feel this way, there are also quite a few people that are good at playing pool, and enjoy playing it for fun as well as for money.

Many people today simply don’t want to take the time to learn how to play. This is why online pool has become so popular. The game will tell you exactly where you need to hit the pool cue in order to go in, as well as tell you how hard you need to hit the ball and what spin you need to put on the ball. All of these items are something that a person who plays pool would know and have to calculate himself. People today simply do not want to take the time to learn the ins and outs of pool, as well as all of the rules. It is simply easier to play online.

Now that you know the reasons that pool has made a decline in recent years, you may begin to wonder how it is even still around.  Although there are quite a few reasons that pool is not popular anymore, there are still quite a few people from all over the world who enjoy playing pool for fun as well as professionally. If you combine that with the fact that a professional pool player can make $500,000 to one million dollars a year, there will likely always be interest in the game.