So what is an arcade 1up machine?

An Arcade 1up machine is a ¾ size officially licensed arcade cabinet designed to be in people’s homes. They stand 4 feet tall, but have risers that can make them normal playing height. They are designed to be assembled at home, and they already have one or more preloaded games onto the machine.

If you want to know more about what Arcade 1up machines are available, and how much they are as well as how to play them, you will want to keep reading. You can also watch this video explaining what an arcade 1up machine is.

Common questions about the Arcade 1up machines.

While most people today only know about apps and video games, some of us are still loyal to the original arcade machines. There are alot of questions people have about these machines. Some of the most popular ones are:

Do Arcade 1up machines save high scores?

Do these machines come with interchangeable rooms?

How tall are these machines?

What games are available?

Many of us may be more familiar with the Sega Mini, PlayStation,  and Xbox, but some people, even those who love the newer games also love the old arcade games. The Arcade 1up cabinets are a series of arcade games that target home-players. They are smaller compared to the original Arcade machines.

Arcade 1up cabinets are officially licensed. It means that they are not duplicated and come with the original piece of cabinet designs and relevant artworks. These games have not left out the games either; thanks to the MAME industry, all the games were collected and saved for the users. These cabinets are usually sized about ¼ shorter than their old school counterparts meant for public use. They come with the same controller handle to add to its authenticity of look and features.

The Names and categories

To many people, the name Arcade 1up is less familiar. The reason is they are usually entitled with an additional tagline. Arcade 1up is the name of the series of these gaming cabinets.

Here is a list of all the Arcade 1up cabinets available in the market. 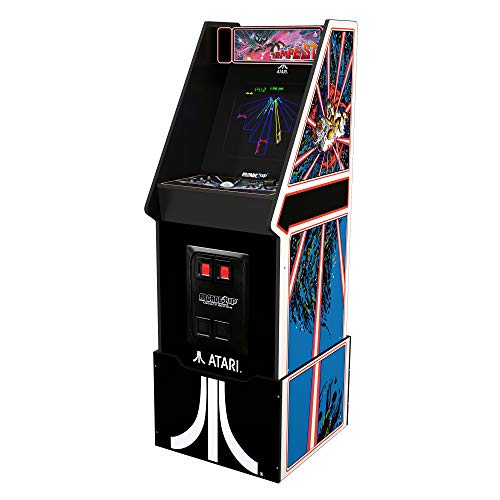 This arcade also has three other games on it. They are Major Havoc, Lunar Lander, and Tempest. Although it is far from the most popular games available through these machines if you loved these games then it is a must have gaming cabinet for you! 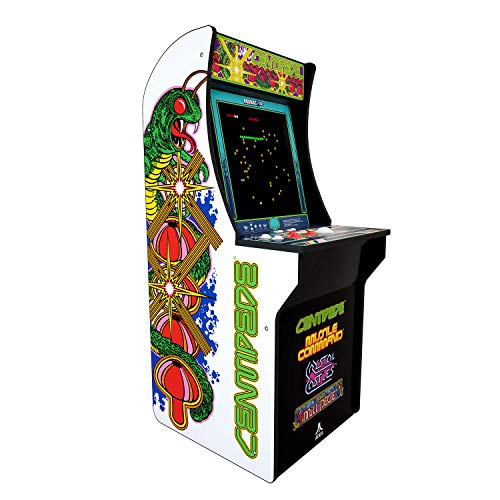 It comes with three other games including Crystal Castle, Millipede, and Missile Command. All of these games are a blast to play and for many people this gaming machine is a worthwhile purchase. 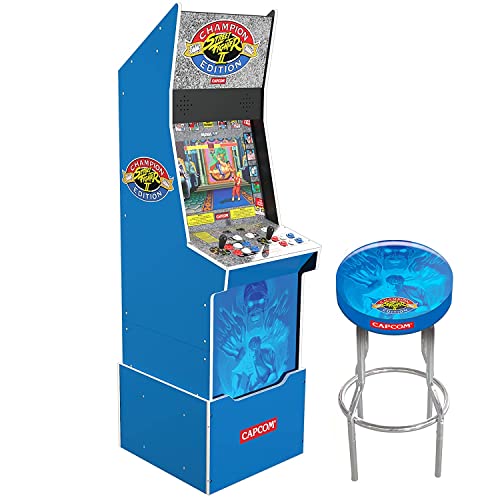 It offers three variants of game arcade machines; Champaign Edition, The New Challengers, and Street Fighter II Turbo. This game is far better than other Arcade 1up machines when it comes to additional features. It offers a variant and recognizable control layout. The controller is used to handle the game through six buttons and a joystick. 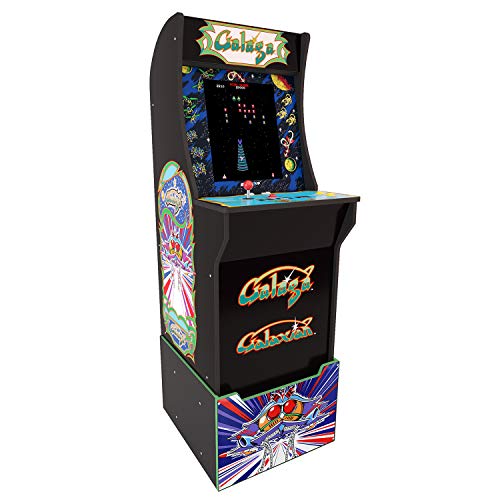 This game is one of the favorites for its extremely 90s look; it includes the Galaga and Galaxian series. Is there anything better than playing Galaga on an old school arcade machine? Many people would tell you no!

These are categorized in four cabinets including; Final Fight, Ghost & Goblins, 1944, and Strider. These games aren’t as well know so this cabinet is often in stock after other versions have sold out. If you love old school fighting games then this is the arcade machine for you! 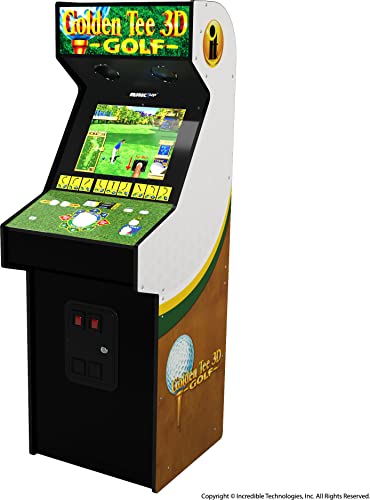 This gaming cabinet has used a less imaginative system to name their cabinets; Golden Tee, Golden Tee ’98, Golden Tee ’99, and Golden Tee 2K. Although golfing on an arcade machine can be a little bit different (and difficult to master) this is a great choice for the golf lover in your life. 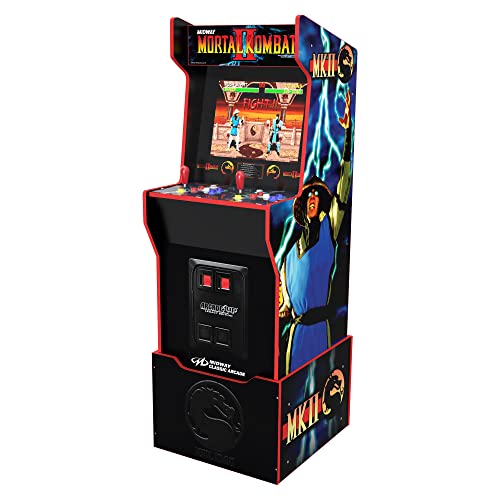 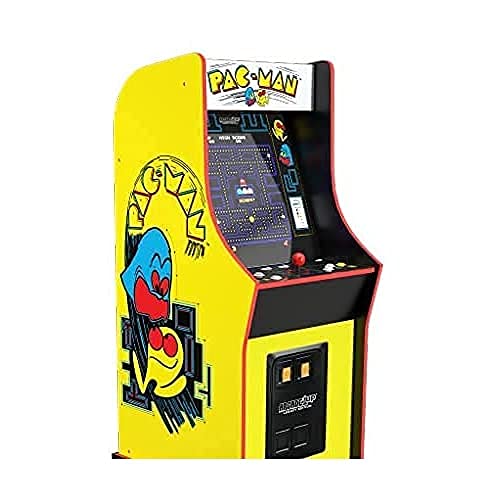 This is a nostalgic sounding gaming arcade that includes Pac-Man and Pack-Man Plus. Some of the gaming cabinets even include Ms. Packman.

As previously mentioned, many of the people who play the Arcade 1up gaming machines are wondering if the Arcade 1up saves high scores. While some players think it’s only about the game, others have a more competitive side to them. The older arcade game machines in the bars and restaurants usually saved the top score of the best player.

People used to even gather up together and get a couple of their friends together, only to break that score. When it comes to the tiny cousin of arcade machines though, not all of them offer the same features. Some of them save the high score and when the machine is powered off, everything goes back to the factory setting, while others keep the high scores all the time.

This game is definitely a crowd favorite, and when people play, they play for a high score. Millipede actually keeps the three high scores and even when the Arcade 1up cabinet is pulled off the plug, it withholds the information of the top three previous champions. This is the reason that so many people want to play this game, and play competitively. Crystal Castle and Missile Command do not withhold this information after each round of the game finishes.

This gaming arcade also saves the information on the top 3 players. Although this information is removed once we unplug the game from electricity, it is still very fun to play. One other thing about the game you should know is that if the score crosses 100,000, the game resets itself back to zero.

Outside of these two games, the saving capacity of the other games is extremely limited and most do not save the games at all. Although this is sad, it does not stop people from buying these games as normally they are only a couple hundred dollars, and still a lot of fun to play.

How much do Arcade 1up machines cost?

If you are thinking of treating yourself to an arcade gaming machine, you will want to keep in mind how much money you can spend on one. You will need to remember this as once you start to look at all the different games, you will want to buy more than one or two of them.

You can purchase any of the prior mentioned types of Arcade 1up anywhere about $200 to $500 which is equal to and in some cases, cheaper to many of the new game consoles. However, you can always choose to buy a second-hand one for a lot cheaper.

Another option to find these hearty gaming machines is to keep an eye on the sales at the stores that sell them. Most of the time you can find discount offers from stores that are trying to increase their sales. Some people have even found them for up to 50% off! If you want to purchase one now though, this is the best place to do so.

If you are a big fan of the old school games, then an Arcade 1up machine was practically built just for you! They can offer you a range of games and options and add to the beauty of your game room as well as any man cave.. Assembling these cabinets is quite simple and takes a maximum of one hour. If you just purchased your machine and you want to know how to assemble one, you can watch the following video.