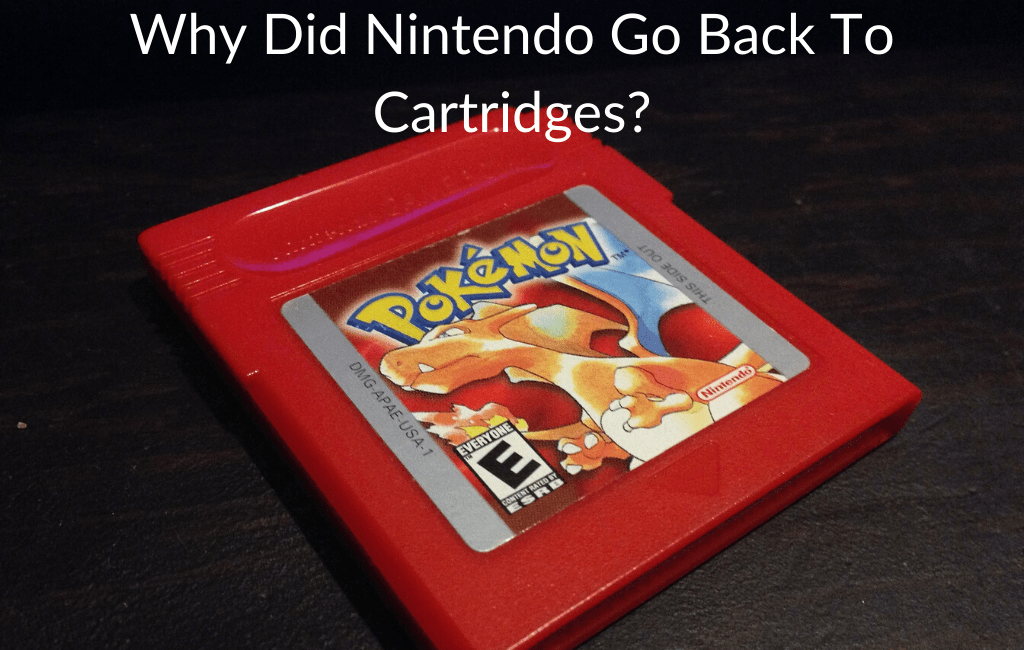 So why did Nintendo go back to cartridges?

There are many reasons why Nintendo decided to go back to cartridges instead of staying with discs. Even though they claimed it was for a better user experience as discs easily scratch, it all came down to the bottom line. Because cartridges were more expensive to make, Nintendo was able to charge a premium, not have anyone knock off their games, and create high demand which drove prices up.

If you want to know more about Nintendo and them using cartridges, you will want to keep reading this article. Also, below is a video that covers this topic.

Why is Nintendo still selling Cartridges?

There might be numerous reasons, but there are two main reasons why people think that Nintendo is still using the cartridges and aren’t going back to discs. Cartridges are similar to SD cards. The speed of running the data is fast and more reliable when compared to a disc.

If you compare the cartridge with a disc, you will see that the cartridge is built better, and has a greater reading speed. Cartridges can hold up to 32 gigabytes. You also don’t have to worry about the scratches and your game being pirated.

The second reason is the probability. A CD might have a bigger space to save programs, but it still needs the ROM to read everything in order to play the game. If your ROM is having problems, you won’t be able to play the game. The scratches are the main concern for the ROM to not read the disc.

If we talk about the Cartridge, they don’t  lag during the gameplay because they are not dependent on “scratches and other complications.” You just plug it in and start playing and everything works fine.

Also, if we look at the Xbox and Playstation, they are continuously trying to add new games in order to let the players see the improvements, upgrades and performances. That is not the case with Cartridges though because you can install new games in the SD card and SD is fast enough to handle the burden.

So, the above explanation is enough to know the reason why Nintendo is still selling Cartridges and not going back to disks.

Now, let’s talk about the benefits of Cartridges (SD Card) and CDs.

In this section are listed some of the benefits of Cartridges to help you better understand the reasons why Nintendo took this step to improve their customers experience.

The only drawback it has when you use it for Cartridges is that it only provides you 32 gigs which isn’t enough nowadays because CDs are now providing 50 gigs by reading the data on both sides on the disk.

A few general disadvantages of the SD cards are given below:

Pros and Cons of CD

So, there are a lot of benefits that CDs are providing to you, but there are a few cons as well. Let’s break everything down related to it:

So, these are the benefits that CDs can provide you, but here are the cons.

There are hundreds of games that you can play, but not all of them are that good. So, why would you waste time playing games that are not that good? Here are the best 50 games that Nintendo has ever produced.

Above are the most voted games of Nintendo and you can choose any of the games and enjoy playing them without a second thought.

Now that you know why Ninetendo went back to cartridges, you can easily understand why they did it. Nintendo wants the customer to have the best experience, and in order to do that they need to use cartridges.

Even though using cartridges is more expensive than using a CD, Nintendo wanted to put their customers above their profit. This is just one way that Nintendo has continuously shown their customers that they care about them more than making money.

Although the CDs do enable options that are better, cartridges have come a long way in today’s world, and can handle a lot more power than they could originally.

Nintendo is a very innovative company and has continuously shown gamers that they are the company that will be around for forever no matter what other gaming companies come and go. Even though cartridges are more expensive and Nintendo sells their games for a higher price, the games themselves have better quality and last far longer than any other companies games. So the next time you go to buy a game and the game is a little more expensive, you have to realize that the games normally do not devalue like games from other companies, as well as the games will last forever.

Because cartridges do not go bad, and are unable to be scratched and damaged, they will continue to work in your gaming system for as long as you own it! This is something that draws many people to purchase from Nintendo as well as all of their great games they have to offer!

If you are looking to purchase the best games for Nintendo, you will want to buy them from here!