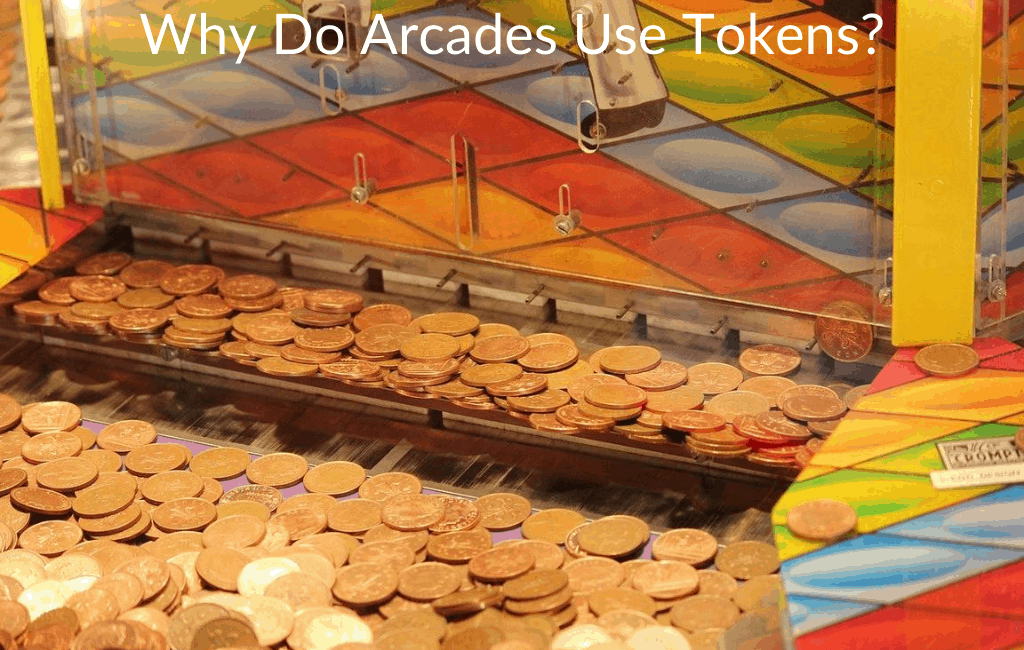 While many people may think arcade games are a thing of the past, they are still alive and well. They are kept in the corner of some restaurant bars and even shopping malls for old times sake. A lot of people wonder why arcades use tokens, instead of being able to push in a dollar into the slot of the machine.

While people keep them for memory’s sake, others are not so happy when their families or a special person finds these tokens in their wallets or bottom of their pockets in the laundry. Either way, these tokens are not useful anywhere else other than in the arcade game itself.

So Why Do Arcades Use Tokens

Most arcade games use tokens instead of money for multiple reasons. It helps the company avoid having to keep change in each machine, it also keeps the machine from jamming and having to repair the machine.

If you would like to know more about arcade games and tokens, please keep reading!

These are many reasons people prefer to use coins or actual cash rather than tokens. Although the arcade owners might think differently, it is more beneficial for them to use tokens in the place of money. Here are some of the most common reasons arcade owners prefer tokens:

To Avoid Clogging Up The Arcade Slots

Using quarters made of copper and nickel could be a lot more tempting for players, but not for the owners. Most arcade machines have narrow coin slots in order to be able to read the coins inserted. The rough edges and design of the quarter veins can cause clogging up and jamming the machine. The first arcade machine used coins. Some folks might remember while they sat in a bar and enjoyed their drinks, it happened a lot that someone was tapping and kicking the slots to free their coins and continue to play. This is the number one reason why arcades use tokens.

Many of the arcade game owners believe their arcade machines can become more durable using tokens instead of coins. They require less service. By using tokens. It is never a safe option to open the gaming arcade interior in front of the customers when it is coin operated. It can just give away the mechanism of the machine and make it a theft subject. Professionals who are cited to repair the machines demand payments. Owners of arcade machines prefer to spend one time converting the slots from coin inserts to token inserts. It would cost them less than the total days of the device being out of service, and the repairing technician service cost is a lot more than the conversion charges.

An operator of an arcade machine needs to sell the tokens to their customers in exchange for real money. They usually keep a count on the money being spent, therefore, they can calculate their profit even better. While the number of tokens is limited and specified, so are the sales. In case the owner himself is not the operator and has hired an employee, the employee doesn’t have to worry about counting and keeping up with the cash and coins.

A box full of coins can be tempting for late-night addicts and thieves to find themselves some extra cash. They go around and they pretend to be real customers while checking out their possible opportunities for a night theft. Most of the owners carried their cash content home with them. However, carrying rolls of quarters is not practical. Having steel or plastic tokens instead of actual quarters can attract fewer thieves.

The arcade machines are manufactured with a coin system to function, however, they are convertible to token use. Most of the owners prefer to order their tokens separately. A little extra expense can save them more money in the long run. Simple disks of the token are universal and can be duplicated by trickster users, but especially ingrained designs for the token can prevent cheating and consequently secure the income of arcade machines.

As stated previously, the arcade game is not originally manufactured with tokens. Along with securing token duplication, they also can secure their customers by having unique tokens to their shop. It is less likely for many customers to have multiple coins from multiple arcades. They usually hand out a bigger amount of cash and receive tokens instead. They could also do this to avoid inconvenience and repetitive returns to the cashier for money / token exchange. When a player has a lot of tokens, they are obligated to play those tokens with the same arcade machines, specified design of tokens stops them from playing them at other arcades. This way they secure the generated income.

Many of the newer arcades give out tokens to introduce themselves to their audience by offering them a free game. Most of the people won’t just throw away the tokens. Since they have earned it for free, they offer it to their family, friends, and neighbors who might possibly want to use the token. Numerous bars and restaurants that offer arcade games can give the tokens as a side happy hour addition or a winning contest. It is a win-win situation. It is also less likely for a player to stop playing after a single game.

Are there still arcades that use coins instead of tokens?

Although most arcades today use tokens instead of coins for all the reasons above, you can still find some arcades that use coins. These types of arcades are more commonly known as penny arcades. You can find them in various locations around the United States including Colorado Springs, Colorado. These types of arcades are very popular although they are not a penny per arcade they use regular coins and keep the nostalgia of the original arcades alive.

Although most arcades that use coins are retrofitted in order to use coins instead of quarters, it is better in the long run then to use quarters for all the reasons mentioned above.

Because some people still prefer to use money instead of tokens then even though most arcades do not accept cash  wasthere are still many across the U.S. that do.

It is more beneficial to use tokens instead of money. Unlike the older systems, many of the arcades are converting their coin slots to token slots. They can avoid both employee and trickster players as well as direct night robbery for slot machine quarters.

They are used as gifts or promotional giveaways to attract more customers and increase sales. One of the first reasons arcades use tokens, is their primary problem with the machines being jammed; coins can get jammed in an arcade game machine and cause the owner costs of repair and loss of a day or two functions; this decreases both profit and customer reliability for group hangouts.

As the arcade games increase in popularity again, many companies are making the machines with a card slot as well. The customer can load the card with the money and then they just swipe the card and the money comes off automatically for each game.