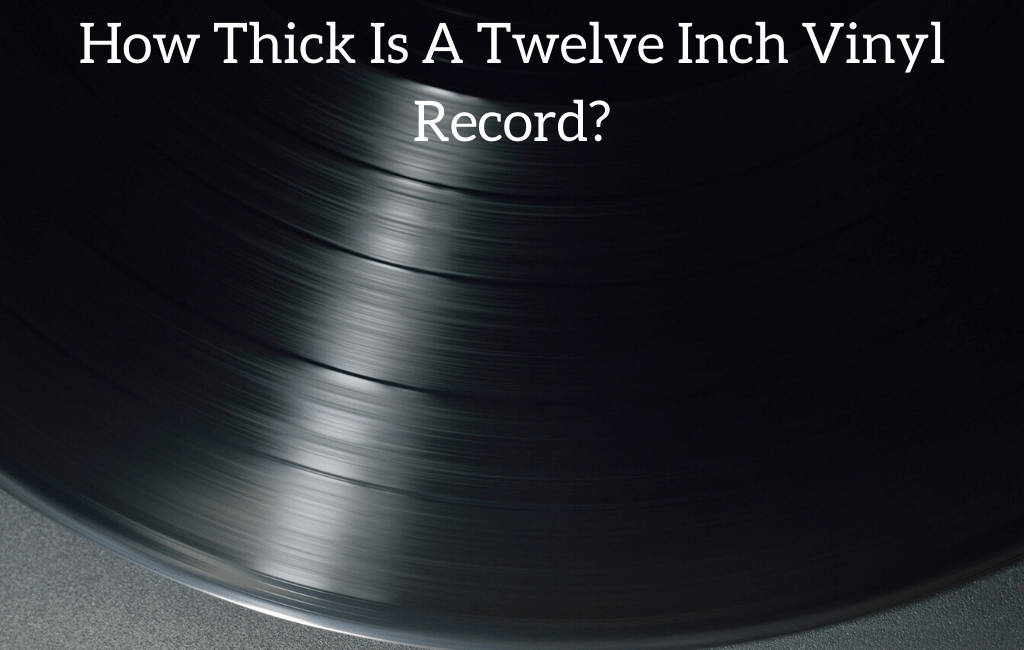 If you are just getting into records or have been into them for years you might be wondering about the thickness of a vinyl record. This article will answer how thick a twelve inch vinyl record is but this answer will apply to almost any record sizes that you find.

Unfortunately there isn’t an exact answer to this question as the thickness of a record can vary quite a bit. You would think that the answer to this would be a simple standard,however, that isn’t the case. Even when machines that make these records are manufactured by the same company, over time they will change.

The thickness of a vinyl record will be slightly different over the entire run of a specific record and records produced at different factories or times will also vary. The range on a sampling of two hundred records in a private collection ran from .9 mm to 2.2 mm. That is quite a big range and shows that records are not a standard thickness but vary significantly.

In the rest of this article we will talk more about the variance of the thickness of records as well as whether the thickness matters and what makes records thicker or thinner than others.

Why would there be differences in the records’ thickness?

Time plus wear and tear on the records done by equipment is one reason they might change thickness over the course of a batch of vinyl records. As most of us over fifty know, things wear out, get loose and otherwise change. Unfortunately that is just how things happen. It is the same with any piece of equipment. After the first ten thousand or so records have been made, small changes in the manufacturing equipment will also create equally small changes in the thickness of the records.

Quality is another example. A bootlegged version of a vinyl record may not conform to even the standard thickness mentioned above; the bootlegger doesn’t care. Freebie vinyl records are also usually lower on the quality scale and will most likely be thinner. A high quality album will tend to be more uniform in thickness across a large number of records.

There is another thickness to gauge, and this one is more difficult. How thick are these records in the grooves that have been etched into them? Most records have a standard depth of point zero zero one one, or 0.0011. The walls of the groove are where the sound is stored.

Does the record’s thickness matter?

It can matter a lot. Super thin records tend to break more easily. This was seen rather dramatically after a devastating brush fire in the Newbury Park area during the late 1960s. Super thin “free” records were either broken or destroyed. Thicker records survived and some might have been playable (once flattened out). It wouldn’t have sounded that great, but that is one benefit of having a thicker record.

Thinner records tend warp more easily as well. This can be prevented with proper storage, but a warped record doesn’t sound the same as when it is still flat. To offset this particular problem, it is a good idea to store the records vertically rather than horizontally. A slight slant is even better.

There is another extremely important way that record thickness will matter. For those who don’t know a lot about record players, the swing arm and needle are as much important to the playing of a record as the vinyl record itself. The calibration required is exact, and the thickness or thinness of the record is going to play a part in how it plays.

If a record is too thick, the needle will be going into the groove at a slant in one direction. If it is too thin, it will go in at a slant in the other direction. Because vinyl records are precision, mechanical audio files, the calibration needs to be as close to 100% accurate as possible.

The next reason it matters has to do with the weight. This is important for the turntable as well as for the record. A heavier record is going to play sound that is truer. It isn’t as likely to skip and jump, which can wreck the mood the person playing the vinyl record is trying to establish.

Can anything make my record thicker or thinner?

It may never look thicker, but small particles of dust and other debris can actually not only make a record thicker, it can also damage it. An audiophile with access to an electron microscope did an experiment with his own record collection. As he stated, it might be overkill but it makes the point quite clearly.

The record looked clean to the naked eye, however, as the microscope enlarged the view, more and more dirt, dust and debris on the record and even in the grooves was seen. This added layer does more than affect the sound quality. In higher power enlargements, cracks and breaks in the grooves are also visible. That can certainly destroy a record over time.

Even if it doesn’t damage the record, the dust particles will affect the sound quality. The spitting noises that come out of the speaker are the result of minute dust particles in the grooves. It is actually listening to the sound of dirt, according to the guy who tested his records.

Fortunately, there are ways around this problem. With proper cleaning tools, the vinyl record can go back to its original thickness when it is cleaned. That doesn’t mean to get a regular dust cloth. Even microfiber versions that work on furniture and vehicles could cause additional damage. It is best to get specifically made vinyl record cleaners.

There is another problem dirt on a record could cause. As mentioned, the needle and arm are highly calibrated. Dust can build up around the needle, causing the calibration to be off. It can damage the needle to the point of requiring a new one. Quality record needles tend to be two hundred dollars and up; much higher than the price of something to clean the record.

Novelty items tend to grow out of most popular things, and that includes record albums. There are all kinds of examples, ranging from chocolate records (with a special player for them) to postage stamps. However, vinyl records have also had a play in this arena.

In the 1970s, the first Star Wars movie came out. The reason this fits into album thickness is because of the “new” science of holograms. When the soundtrack came out there was a hologram imbedded in the record. This had some effect on the thickness.

Novelty records might be thicker or thinner than a normal record’s thickness mentioned above. If you have a novelty record it is safe to assume that it is not a standard thickness.

Record thickness is dependent on many things, from the manufacturer to its treatment after purchase. The thickness does have to be within certain parameters, but the variance can be over one mm on many records. The reason for trying to keep it within those parameters is the calibration of the arm and needle.

Other things that can be done to help keep records to the same thickness are to keep them away from heat sources, store them properly and use care when taking them out and putting them away.

It is also a good idea to clean your records regularly to keep them free of dust and dirt.