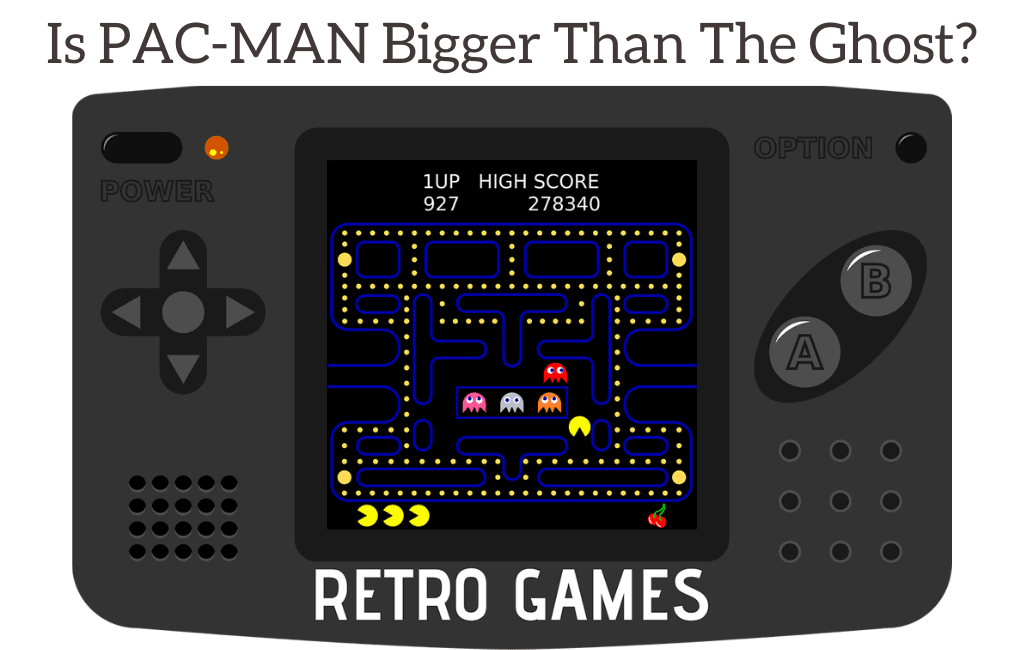 Have you ever played Pac-Man and wondered who was bigger? Maybe you are in the middle of an argument of why the ghosts can kill someone that is bigger than them. No matter where you are, we all have questions like this!

So is Pac-Man bigger than the ghosts?

Although it may appear to the naked eye that Pac-Man is bigger than the ghosts, this is not true. It only appears this way because Pac-Man is round in shape while the ghosts are more of a vertical shape. In reality, they are both the same size. As hard as that is to believe, it is true.

If you want to know more about Pac-Man and the Ghosts, you will want to keep reading. You can also watch this video showing the first ever man to beat the entire Pac-Man game!

PAC-MAN is almost circular, whereas the ghosts have an odd kind of shape. This vast gap creates a big mess when it comes to sizes. One other  important factor in this regard is the number of ghosts. Since there are many ghosts and just a single Pac-Man, these numbers create a problem in your mind.

The psychological impact of these numbers is going to make you think that the Ghosts are  smaller than the Pac-Man, but this is not true. Some people may even think because there are multiple ghosts, that they are bigger than Pac-Man.

If you observe closely,  you will notice that the two are almost the exact same size, and there is no significant difference between them. One major factor that creates this confusion is the shape of the ghosts, boundaries, and blockage on the complete screen map.

The sprites and boundaries are the shapes or obstacles that are placed randomly on the screen. Pac-Man has to move in between them to make its way to eat the dots without being caught by the ghosts.

Since the main character in the game is Pac-Man and the whole game revolves around it, in most people’s minds, he is instantly considered as the biggest in the game. On the other hand, some people go based on the visual experience, and as they watch Pac-Man die by a ghost, he instantly looks smaller again.

Is Pac-Man the same size on every console?

One other important factor is the device on which you play this game. In the past, many people enjoyed this game on the retro consoles, and even in an arcade.. The displays for these consoles were the old TVs. They had a poor show as compared to today’s devices. This is why Pac-Man appeared more significant than the ghosts because of fewer pixels on the screen.

Since there are many kinds of devices on which the game is played, the size may appear to change on each one of them. This creates a lot of misunderstanding between the dimensions. For larger devices, Pac-Man appears enormous, and the ghosts appear a bit smaller, however, for handheld devices, both of these characters look the same.

Although the size of the ghosts and the size of Pac-Man have no effect on the game or how it is played, it seems this is a big issue that quite a few people actually end up fighting about.

Does the screen size make them seem different sizes?

Does Pac-Man move slower than the ghosts?

Pac-Man actually moves at the same speed as the ghosts. The rate increases with the improvement in levels, but since the pace of both ghosts and Pac-Man increases, the relative speed or the speed difference between both of them remains the same.

Do they look different sizes on posters?

If you have ever seen some random images of the game Pac-Man on the internet, you will see a dramatic increase in the size of the two. From that angle of view, you will undoubtedly think that the two characters are of very different sizes.

Because of that, people develop a mindset that the two are different in size, but this is not the case. People need to play the actual game first to understand the exact dimensions of Pac-Man and the ghosts.

When you start the game, you will see no difference in the sizes of the two characters. They are only different in their color, shape, and role type.

Is it possible for them to be different sizes?

Although it is possible for Pac-Man and the ghosts to be different sizes, it would create a negative impact on the game. If the main hero in the game, which is Pac-Man, is bigger and the other characters, which are the ghosts, have a smaller size or vice versa, the game will create a negative impact on its players. Because of the different sizes, you would instantly think that the game is rigged and the smaller one moves slower.

The difference in size will create an adverse impact on the graphical user interface of the game also. If one character is significant and the other is smaller than the resulting match will turn into chaos. It will create no sense, and a chaotic scene will be developed in the entire game.

Where can I play Pac-Man today?

Although Pac-Man is still available to play in Arcades, most people don’t want to go to them, or just simply don’t live near one. The best place to play Pac-Man is in your own home! Yes you read that right! For the first time ever, you can own your very own Pac-Man arcade machine for only a few hundred dollars. This is available because of these new arcade machines called Arcade 1up machines.

The Arcade 1up machines have many different games available for them, and one of these games is Pac-Man. These machines are ¾ size so they fit perfectly in any man cave or bedroom without taking up the whole room. They also are extremely fun and a blast for anyone to play at any age! If you are interested in purchasing one, here is the best place to get one!

Now that you know that Pac-Man and the ghosts are the exact same size and move the exact same speed, you can play the game knowing that it is not rigged. You can also tell your friends when they complain about the ghosts being bigger or moving faster, that that is simply not true. So go ahead and play a game or two of Pac-Man and enjoy every minute of the game.