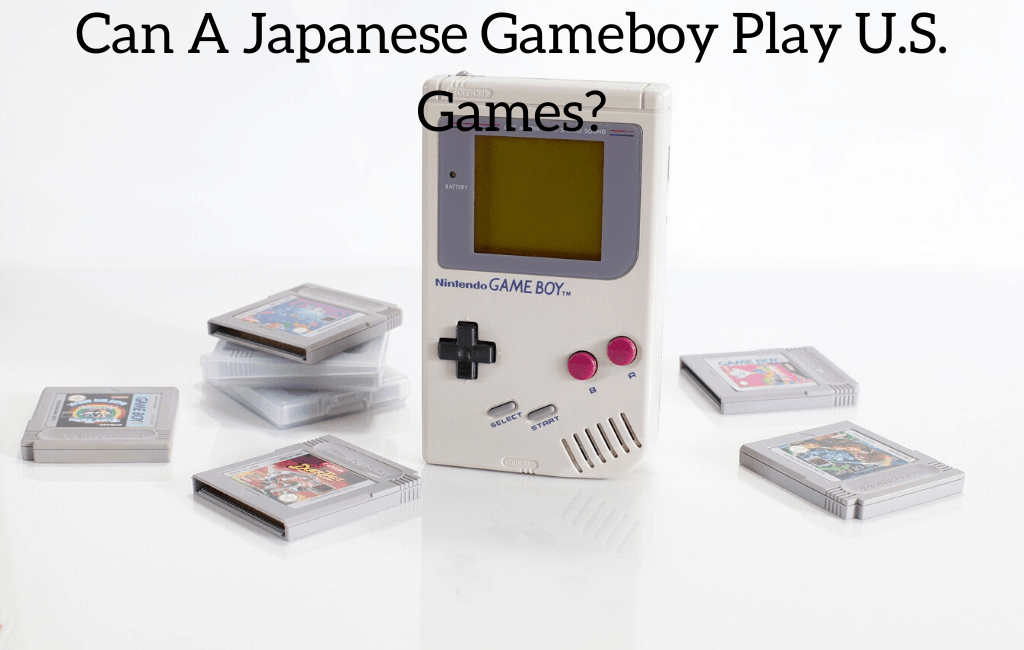 Have you ever owned a Japanese Gameboy, but wanted to play some U.S. games? Maybe you have a bunch of Gameboy games, but you own a Japanese handheld console? Well in this article we will go over everything you need to know about Japanese and U.S Gameboy games and consoles.

So can a Japanese Gameboy play U.S. games?

Although most people think that a Gameboy is region locked and will not work with games from other regions, this is actually not true. Nintendo actually did a great job of listening to the customers and not putting a region lock on the Gameboys. This means that a Japanese Gameboy can play U.S. games without any issues.

If you want to know more about playing Gameboy games on your Japanese Gameboy, you will want to keep reading. If you want to find the best selling Nintendo accessories currently available you can find them by clicking here.

Do Gameboys have region restrictions?

The Gameboy systems as a whole actually have no regional restrictions. This means you can play any Gameboy game on it as long as your system is the same system as the game is made for.

The Japanese Gameboy is a great little game system with tons of games to play and as well as imports. The system is designed to focus on gameplay ages well, and its simplicity means a lot of the best games don’t have too much of a language barrier.

For games across the globe, such as Japanese, there are many fan translations. Examining the Japanese Gameboy system you will find that there is actually no difference from the American and European versions. They are all made with the same quality as well as with the same operating system.

Yes, the Japanese Gameboy can play U.S. games as not only is the console region free, but the games are region free as well.

Nintendo games come with a code on the sticker for identification. This only applies to original Gameboy games though. This code is a unique identifier for the game and also shows the region the game is from. If you type the code on Google, you can easily find out where the game was made and its English name. If you’re lucky enough, you will find a YouTube video about it and how to play the game.

Other Gameboy games such as color have a code similar to what was described above, though you can tell it’s a Gameboy Color exclusive by the games cartridge shape.

Can Your System Play any Region’s Game?

When it comes to most home game consoles, you will find out they are region locked. This means that you can’t play them outside the region as it is restricted, There are a few exceptions though. These exceptions include Datel Freeloader where you can play Gamecube and Wii games from other regions.

Nintendo’s portable system is different from the actual consoles though. It has been the opposite since launching with games such as the Gameboy, Gameboy Color, Gameboy Advance, and Nintendo DS, All of these handheld devices are region free.

First we will have to start by understanding why some games are restricted in various regions. You will also need to know the difference between a region free device such as Gameboy and those that are region locked. For example,if you bought the Nintendo 3DS in America you soon found out that the system is locked into the area the 3DS was purchased in.

This system won’t work with games downloaded from Japanese and European markets. The same is true for the different Japanese Nintendo systems that will work just fine for games in japan but will not work correctly with games purchased from the U.S. This system is known as region locked.

Now that you know what the difference between region locked and region free is, you will not be surprised when you purchase a system.  If you buy a Gameboy, you will find out the system is region free, thus free to use games from any part of the world. Region locked means it’s locked to accept and communicate with games only from the specific area of the world the console was purchased in.

Why are some games, region-locked?

Although the need for restriction ended with the development of the Gameboy, other methods were highly restricted with regions and languages.

Nintendo wanted to make sure that the users from all over the world had the best possible gaming experience across the world. They also did this so they did not restrict market saturation and the possibility of the system sold in one region not being able to function correctly when running hardware sold in another. This was a significant issue that many people had.

How do you import U.S. games to play in a Japanese Gameboy?

Examining the entire Gameboy system, there are several ways to import the best games. You will need to remember that all Gameboy games are region free. Since you know this, you will not have to worry when purchasing games from other regions other than the US.

The original Gameboy is a different console but with hybrid releases and full backward compatibility. As simple as it may sound, it’s a disservice to exclude the monochrome game from this list.

Lastly, as you prepare to get new Gameboy games on your Japanese system, you might need to follow the Gameboy Advance importing tips. If you follow what Gameboy says to do, you will not have any problems being able to play games that are from a different region.

Now that you know all about Gameboy games and that you can play them on a Japanese Gameboy console, you can buy the Japanese console to play all of your games on. You may also buy any Gameboy from any region and you will be able to play any games from any region on that console.

Nintnendo loves its gamers, and has always listened to what the customer wants rather than just simply doing something in order to make a few extra dollars. This is one thing that Nintendo is known for, and this is why many people all over the world prefer Nintendo over any other console.

The people who prefer to play on Nintendo love not only the amazing consoles, but also the way that Nintnendo takes care of its customers. Good customer service goes a long way in keeping a customer happy and wanting to come back and purchase more of your products.

This is something that Nintendo has done so well. Instead of focusing on the latest and greatest console, they made a dependable one that had many great games, and people from all over the world flocked to purchase it. This one simple step goes to show you that if you simply show that you care about people, that they will stick with you forever.