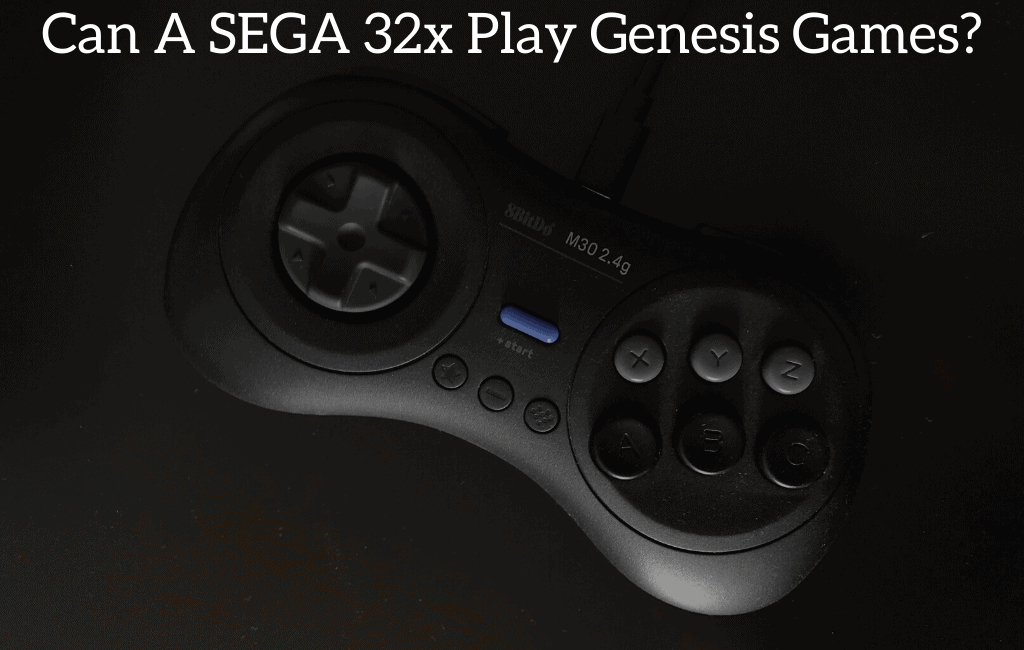 Since SEGA genesis was such a success in North America and Europe, Sega decided to create the SEGA 32X. The Sega 32X  was an add on made specifically for the SEGA Genesis video game console.

Gamers have tried to use the consoles to play games from another gaming console library. A question frequently asked is Can SEGA 32 X play Genesis games? Even if you did not ask this question I bet now you are curious.

Yes, Sega 32X can play Sega Genesis games. If you check the original 32X manual, it shows that you can directly plug in Genesis games to the 32X and they will work, with the exception of Virtua Racing.

SEGA is a well-known video game developer that dominated the gaming market in the 1980s. If you are a true gamer, I am sure you already know this. In SEGA’s glory days they released a gaming console called the SEGA Genesis also known as Mega Drive in 1989. The SEGA Genesis is a 16-bit video game console. Its library is considered rather extensive with well over 600 games created both by SEGA and a wide array of third-party publishers. The top sellers of genesis included Sonic the Hedgehog, its sequel Sonic the Hedgehog 2, and Disney’s Aladdin. The genesis library started quite small but then grew to eventually attract gamers from all different walks of life.

To see some of the best selling Sega accessories and consoles as of right now you can click here.

Reasons to play genesis games on your SEGA 32x

SEGA 32x offers a wide array of games that come with its gaming console.  five of those games are:

Even though SEGA 32x comes with its own games and the genesis console comes with its own games, there are a lot of benefits to playing your SEGA genesis games on your 32x. Although the biggest benefit  in my opinion is the fact that the graphics are upgraded from 16 bit to 32 bit, here are the main two reasons according to all the gamers I have talked to.

When gaming using the 32x console the gamer will notice that the image is a bit clearer than on the Genesis console. This is a big plus for any gamer. The better display image is because the SEGA 32X has a higher build quality in its video encoder than that of the SEGA Genesis. While it isn’t a significant difference it definitely improves the gaming experience.

The Sega 32X also has improved audio over the Sega Genesis. The capabilities of the audio system are extra sound channels, and enabling multidimensional sounds. This essentially allows for you to hear 3D sounds in the game which is approximated based on the sounds heard in everyday life, even with a regular stereo. Also, another capability of the 32x audio is that it has Q sound technology.

Here are 9 simple steps to connect the 32x system. If you are like me though and you learn visually, here is a video that explains how to connect it as well.

SEGA games are well-loved and have a ton of classics that even now some gamers just cannot get enough of. If you still have an interest in playing the same game systems and have access to one you should dust it off and have some fun.

There is still a lot to learn about these retro home video gaming consoles. One of which being can SEGA 32x play SEGA genesis games. If you are interested in playing your SEGA Genesis games on your SEGA 32x systems and wondering if it can be done. The answer is yes you most definitely can and it is not complicated at all to do so.

There are two benefits to playing Genesis games on your 32x system. One, the difference is the quality of the image. It is quite evident, also the audio quality is better than that of the Genesis system.

Now that you know that not only can this be done but the gaming quality has a better pay off, you can jump right into playing. There are 9 simple steps to follow and before you realize it you are playing your favorite SEGA Genesis game on your SEGA 32x gaming system.